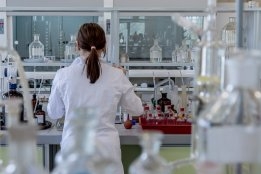 The inaccuracies appear to stem from a misunderstanding over how testing has been conducted by suppliers during the development phase of new fuel recipes to meet the 0.50% sulfur cap.

Over the course of the last year suppliers have been developing their VLSFO recipes by combining various fuel components in different proportions with the ultimate goal of identifying a formula that results in an on-spec, commercially viable, fit-for-purpose fuel.

Testing is undertaken throughout this process as suppliers hone in on their final formula.

"From the data we saw, sediments were a common problem for suppliers during this development process and we saw elevated levels in about 60% of the developmental recipes, through laboratory bench level testing samples we tested," AmSpec fuel blending specialist, Shannon Boudreaux, told Ship & Bunker.

All final blend certifications performed by AmSpec are meeting the ISO 8217:2017 Specification, including Total Sediment Potential, which is the official referee method as directed by ISO

"This was not an industry secret as this topic was strongly addressed in the release of ISO / PAS 23263 in late Q3 2019. To be clear, this is not to say that 60% of the final recipes have sediment problems. All final blend certifications performed by AmSpec are meeting the ISO 8217:2017 Specification, including Total Sediment Potential, which is the official referee method as directed by ISO."

Importantly, the development recipes are not used to blend fuel that is then supplied to ships.

A report by Reuters quoting the Amspec data has attracted significant attention in recent days, having been picked up by both other major news outlets and industry media.

The report appears to have been misunderstood to suggest there are widespread issues with sediment levels in VLSFO fuels being supplied to ships today, and in some cases led to reports incorrectly suggesting some 60% of IMO2020 fuels in Houston fail to meet sediment specifications.

"I have not heard of any issues with sediment or otherwise in the USGC region," a Houston-based physical supplier told Ship & Bunker earlier this week.

This should not be taken to mean there have been zero problems with the new VLSFO fuels, and indeed FOBAS in December issued an alert regarding elevated sediment levels in a number of VLSFO samples from Singapore.

However, it is yet to be seen whether the IMO2020 rule has resulted in a greater number of off-spec cases than would ordinarily arise.

Bunker Jobs: Bunker Trader - Experienced Back to Back, Singapore

Salling Search is working with a worldwide and renowned bunker supplier.