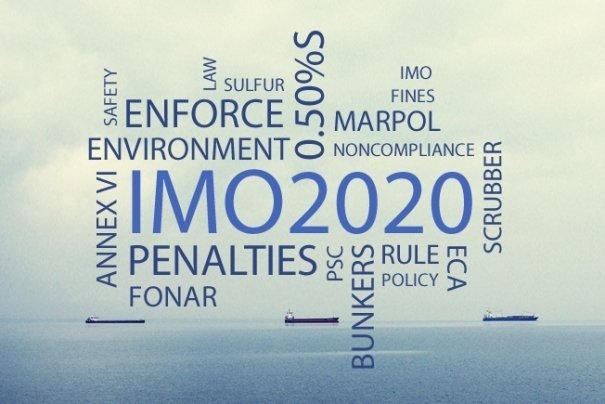 The global sulfur cap for marine fuel today falls to 0.50%. Set as part of MARPOL Annex VI, the change is more commonly known as the IMO2020 rule and marks a reduction from the previous sulfur cap of 3.5%.

It is a historic moment not only for the bunker, marine, and oil industries along with their related stakeholders, but with some 90% of world trade carried by the international marine shipping industry, the impact of this change will be felt across the globe.

The change, agreed by IMO in October of 2016, is expected to result in a significant reduction for shipping's negative impact on human health due to air pollution.

What Are The New Rules Exactly?

From today, unless they are operating in waters that require a lower sulfur cap to be adhered to - such as the 0.10% sulfur caps within the emissions control areas (ECAs) of North America and Europe - all ships of 400 gross tonnage and above must either:

With the current global fleet standing at around 60,000 vessels, of which only some 2,500 are expected to have scrubbers installed as of today, IMO2020 means the vast majority of ships will now be using maximum 0.50% sulfur fuel. However, as different ships have radically different fuel consumption requirements, it is unclear exactly how much of the industry's 300 million mt per year bunker demand will switch to the new lower-sulfur products.

Who Do the New Rules Apply To?

In short, almost all ships. Specifically, the new rules apply to nations and other parties who are signatories of MARPOL Annex VI.

IMO says MARPOL Annex VI currently has 95 Parties, who between them register 96.71% of world merchant shipping by tonnage.

Why is IMO2020 So Significant?

This change is ultimately about IMOs efforts to reduce the negative impact of ship emissions on human heath and the planet as a whole. Today is nothing less than one of the most meaningful steps forward we have taken as part of that.

But this step forward comes at a price.

Until today, modern ships have mostly been burning high sulfur fuel oil (HSFO) as fuel. Creating these fuels has been relatively straight forward.

Lowering the sulfur cap to 0.50% has required the creation of new fuel formulations that are currently referred to as VLSFOs (very low sulfur fuel oils). This is a general term that actually coverers a number of different classes of fuel that all meet the 0.50% cap.

The change in fuel formulation has many consequences that have already been discussed at length in these pages, not least of which is that ship operators will have to pay more for fuel.

It is unclear exactly how much more the shipping industry as a whole will now have to spend on fuel, but even conservative estimates see it being tens of billions of dollars per year. This increase in cost will have immediate consequences for credit thought the supply chain, and will be a cost ultimately borne by end users of marine services and products moved by seaborne trade.

The sulfur cap drop from 3.5% to 0.50% also has huge consequences for enforcement. Until now, as the average global sulfur content of HSFO has been around 2.7% - well within the previous 3.5% limit - enforcement of the marine fuel sulfur cap has been a non-issue. Moving the cap to 0.5% effectively means most MARPOL Annex VI signatories find themselves enforcing the sulfur rules for the first time. Enforcement of the sulfur rules for vessels operating in the deep sea trades is new to all.

The new fuel recipes also mean a change to how refineries operate, which in turn will impact many other seemingly unrelated markets. For example, back in 2017 John Auers and Stuart Ehrenreich were already looking at the impact of IMO2020 on the production of primary aluminum.

The next milestone in terms of the sulfur rules comes on March 1, 2020, from which time vessels will not even be permitted to carry fuel above 0.50% sulfur unless they meet one of the other criteria for compliance. (until this point vessels may carry noncompliant fuel but may not burn / use it).

This is, however, about much more than sulfur. Yes, IMO2020 has been called the biggest change to the marine shipping industry since it moved away from coal, but the truth is that this is only the first step in a much longer journey that ends with a complete transition for marine energy.

As significant as IMO2020 is, far greater challenges lie ahead if we are to meet the IMO2030 and IMO2050 GHG reduction targets, and in the process reduce other headline emissions such as PM and NOx.

The majority of these fuels have been VLSFO and ULSFO fuels.

Success of programme paves way for wider use.

You will be a part of an established and highly successful key account team in Singapore.