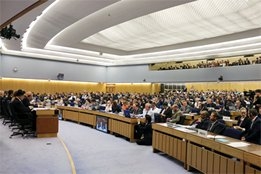 The International Maritime Organization (IMO) today has adopted an initial strategy on the reduction of greenhouse gas emissions from ships.

Of the 173 members present at MEPC 72, it is understood only two countries - US and Saudi Arabia - remained fully opposed the adoption of the draft text, but this did not prevent it becoming an official decision.

The deal envisages a reduction in total GHG emissions from international shipping which, IMO says, should peak as soon as possible and to reduce the total annual GHG emissions by at least 50% by 2050 compared to 2008, while, at the same time, pursuing efforts towards phasing them out entirely.

The deal made today at this week's 72nd meeting of IMO's Marine Environmental Protection Committee (MEPC 72) follows reports yesterday that only two nations - Saudi Arabia and the US - stood in the way of the historic deal.

"I encourage you to continue your work through the newly adopted Initial GHG Strategy which is designed as a platform for future actions. I am confident in relying on your ability to relentlessly continue your efforts and develop further actions that will soon contribute to reducing GHG emissions from ships," said IMO Secretary-General Kitack Lim.

While the deal represents considerable compromise by Member States at both ends of the spectrum of ambition, with some nations pushing for a 70-100% reduction by 2050, and others a 50% reduction by 2060, the agreement was nevertheless widely welcomed.

"The text may not be satisfactory to all but it represents a strong middle ground… in this context I believe this compromise text is a solution that should be able to keep everyone on board," said Lim.

David Paul, environment minister, Republic of the Marshall Islands, whose nation had been pushing for the highest level of ambition, called the deal "fair".

"This is a fair deal and by adopting this initial strategy which contains a vision to phase out GHG and set an absolute and landmark cap on emissions the international shipping sector will embark on a transition to a low emission future, where shipping can grow sustainably and maintain its role as the backbone of global trade," he said.

Environmental group Transport & Environment (T&E), meanwhile, suggested a greater level of ambition could have been agreed if had not been for a handful of opposition.

"The IMO should and could have gone a lot further but for the dogmatic opposition of some countries led by Brazil, Panama, Saudi Arabia. Scant attention was paid to US opposition," said T&E 's shipping director Bill Hemmings.

The initial strategy is due to be revised by 2023.

The firm is set to launch a joint project with Oshima Shipbuilding to design and develop the vessel.

Dan-Bunkering, Bunker Holding and CEO Keld Demant will not appeal the decision, with Demant's position at the firm unchanged.