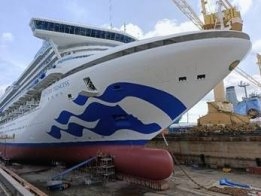 The Sapphire Princess retrofit was completed during a scheduled dry docking of the cruise ship in Singapore. Image Credit: Silverstream Technologies

Silverstream Technologies has won a second order from a Carnival Corporation unit for its bunker-saving air lubrication technology.

Princess Cruises has ordered one of the systems for the Sapphire Princess, Silverstream said in a LinkedIn post on Friday. The system was installed during a scheduled dry docking of the cruise ship in Singapore.

The installation follows one on the Diamond Princess in June 2017.

The systems, first developed several years ago under the company's previous name, DK Group, have shown consistent bunker savings of around 5% by letting a vessel ride on a carpet of air bubbles that reduces friction between the water and the hull surface.

Shipping companies are investigating a range of new technologies that can save them both in fuel costs and greenhouse gas emissions as the industry gradually bears down on its carbon footprint. Taking on a variety of fuel-efficiency measures and technologies may be enough to deliver the International Maritime Organization's goal of cutting emissions per transport work by at least 40% from 2008's levels by 2030.

Over the longer term the shipping industry will need to shift to zero-carbon fuels, but fuel-efficiency measures and technologies will still be useful at that point to help mitigate the much higher cost of the new fuels.

Meanwhile, analysts anticipate another round of U.S. stock draws.

The Meishan terminal at the Chinese port is planned to be partially reopened on August 24, followed by a full reopening on September 1.