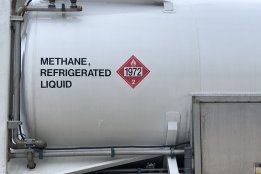 Interest in alternative bunker fuels on the up. Image Credit: Ship & Bunker

2019 was a record year for interest in vessels using alternative bunker fuels and technologies, according to the latest data from DNV GL.

"For LNG, the long-expected tipping point seems to have been reached," it said.

"The trend is increasingly towards larger ships with higher fuel consumption, and many of them will be deployed in global trade."

Still, the lack of LNG bunkering infrastructure is still hampering a greater level of uptake, particularly in the deep-sea segments.

Battery power also saw a sharp uptick in interest, and there are now 390 vessels in operation or on order that are set to utilize the technology.

By far the largest share of those are in the car/passenger ferry trade , with 183 vessels.

Use of bunker related technologies also grew in 2019, and the uptake of scrubbers has been well documented in these pages. DNV GL said in the last year it added nearly 1,200 ships to its statistics.

It currently lists 3,881 vessels with scrubbers either in operation or on order. As this number is based on direct reports of confirmed orders from the scrubber makers, some suspect the actual number of scrubber equipped vessels is higher than this.

Looking ahead, as the industry looks to meet the IMO 2030 and IMO 2050 GHG reduction targets it comes as no surprise that for 2020 DNV GL anticipates a significant pick-up of interest and investments in all alternative fuels.