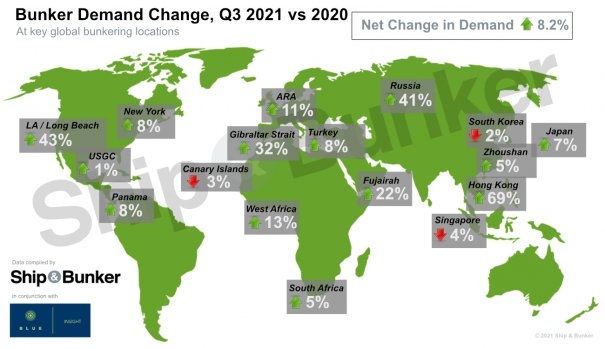 Demand at key marine fuel hubs jumped by 8.2% in the third quarter of 2021 from the suppressed demand levels seen during the COVID-19 pandemic a year earlier, and also rose in a less pronounced way from the second quarter of 2021, according to the latest market survey of bunker sales volumes in 17 leading global locations.

As in previous quarters, Ship & Bunker and consultancy BLUE Insight surveyed bunker market participants around the world alongside official data where available and found an average jump of 8.2% in volumes in the third quarter from the same period of 2020. The year-on-year rise compares with a 6.3% year-on-year gain from the initial shock of the COVID-19 period in the second quarter. Q3 volumes sequentially were 1.2% higher than in Q2 2021.

"The current quarter seems to reflect the steady return of demand we saw in Q2 and a demand recovery for 2021 close to 2019 levels," Adrian Tolson, director of BLUE Insight, told Ship & Bunker.

"Notably some of the more oil-oriented supply locations such as Fujairah and West Africa performed well, perhaps driven by more traditional patterns of oil demand as a reflection of improved economic activity."

Bunker demand is rising from the lows seen at the start of the COVID-19 pandemic last year, when shipping activity was curtailed and the bunker market was coming off from the abnormally high trading activity seen in the IMO 2020 transition the previous quarter.

The area where we have seen the strongest performance is the Far East and Southeast Asia.

Soren Holl, CEO of KPI OceanConnect, told Ship & Bunker his firm had seen an increase in volumes of about 9% overall so far this year from 2020's levels.

"The area where we have seen the strongest performance is the Far East and Southeast Asia," he said.

But some markets have started to slow again over renewed concerns over lockdown measures in Asia.

In particular, Singapore's strong performance across 2021 so far had started to wane by the third quarter, with a 4% decline on the year and a drop of 3% from the second quarter.

Singapore's volumes in 2021 so far have been "helped by ample availability of both VLSFO and HSFO," Guido Cardullo, head of business development at bunker supplier Fratelli Cosulich, told Ship & Bunker by email.

"Margins in Singapore have decreased significantly from the previous year.

"This is not surprising because last year suppliers were able to charge a premium for the 'new' grade, VLSFO.

"Already at the end of 2020 this premium was disappearing."

Demand varied across the shipping segments. The container market is still running at essentially full capacity with current abnormally high freight rates, although its bunker needs have largely not changed since the first quarter. Bulker demand has increased sharply since the spring, while tanker demand has cooled. The cruise industry has finally restarted its activities, but its demand remains significantly below pre-COVID levels.

Together these areas saw just under 134 million mt of demand in 2020, meaning they cover more than 60% of current global demand.

The full breakdown of the survey results including sales volumes in each bunkering region for Q3 2021 and 2020 is available for subscribers by clicking here.

While Q3's figures have shown a relatively benign picture of the bunker market, a slowdown in the fourth quarter is likely to leave the end of the year on a sourer note. The 2021 total for these 17 bunkering locations is likely to beat the 133.9 million mt seen in 2020, but is unlikely to top 140 million mt, or come anywhere near 2019's 151.7 million mt total.

Intuitively Q4 demand will not be so positive.

"Change is fast in today's world, and Q3 demand is an historic picture predating the Omicron and Delta Covid winter surges and their likely impact," BLUE's Adrian Tolson said.

"Intuitively Q4 demand will not be so positive and the returning patterns of more normal bunkering demand may be disrupted.

"Current bunker demand patterns, heavily influenced by flows of bunker fuel resupply from both the global refining and the oil trading industries only recently beginning to fully adjust to the interplay between the post-IMO-2020 and almost post-Covid worlds, are likely to be whipsawed one more time."

But Soren Holl of KPI OceanConnect gave a more optimistic picture of where demand is heading.

"If I look at Q4 compared to Q3, we actually still see a strong performance in the volumes," he said.

Oil Soars As All Signs Indicate Bull Market Throughout 2022/23

The company will deploy the 7,915 DWT Fortuna I between Immingham and Zeebrugge.

Singapore: Record TEU Throughput on Back of Strong Bunker Sales