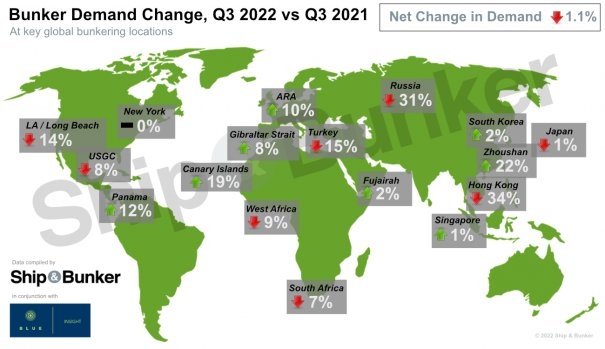 Demand at key marine fuel hubs slipped on a yearly basis but gained on the quarter in July-September 2022, according to the latest market survey of bunker sales volumes in 17 leading global locations, as the market started to recover from the initial turmoil of the Ukraine crisis.

Q3 might be the last strong quarter in the near term for demand from the container industry.

As in previous quarters, Ship & Bunker and consultancy BLUE Insight surveyed bunker market participants around the world alongside official data where available and found an average drop of 1.1% in volumes in the third quarter from the same period of 2021. The year-on-year decline compares with a 4.2% year-on-year drop in the second quarter of 2022. Q3 volumes sequentially were 4.4% higher than in Q2 2022.

"But Q3 might be the last strong quarter in the near term for demand from the container industry as is evidenced in Zhoushan, ARA and Singapore.

"Other container-dominated ports are already showing some disturbing trends – HK demand is still depressed and seems to be shifting to the North permanently and LA/LBs seems to be evidencing a slow demand decline."

The Russia-Ukraine crisis remained the biggest factor driving the global bunker market in the third quarter, although concerns over a potential recession also started to play into marine fuels trading.

Russian sales were down significantly over the year, though had stabilised on a quarterly basis. But the knock-on effects were seen much more widely, with the Turkish market in particular facing a downturn as shipping activity in the Black Sea dropped.

While oil exports from Russia are largely continuing, the tankers carrying these products tend to bunker at Russian ports.

Both tanker and dry bulk are still buoyant, and cruise while dealing with debt and inflation continue to experience strong demand.

Elsewhere in the world, with much of the West seeking to phase out Russian oil imports, exports from other countries are now travelling further to make up the deficit, boosting tanker demand and helping bunker sales at ports where tankers are a prominent part of the market.

Demand from the container market started to drop off towards the end of the third quarter with global economic activity slowing.

"The volatile markets led to an increasing customer interest for various marine fuels contracts and more tonnes were delivered on pre-agreed terms.

"Zooming in on the main shipping hubs, we saw the strong global markets reflected in Singapore, where Monjasa is steadily increasing volume and supplier networks."

In the third quarter bunker prices came off the record highs seen in previous months on the back of the war in Ukraine.

US-listed World Fuel Services, the world's second-largest bunkering firm by volumes, saw its bunker margins dip slightly in the third quarter since surging to the highest level since at least 2014 in the second quarter.

"It has been quite a run to the container, dry bulk, and tanker markets with strong demand across all segments," WFS CEO Michael Kasbar said in a call with investors in October discussing Q3 results.

"While the container sector is softening from historic highs, both tanker and dry bulk are still buoyant, and cruise while dealing with debt and inflation continue to experience strong demand."

As with the previous surveys the areas covered by the survey are Singapore, the Amsterdam-Rotterdam-Antwerp (ARA) hub, Fujairah, the US Gulf, South Korea, Russia, the Gibraltar Strait, Hong Kong, Panama, Zhoushan, Japan, New York, West Africa, South Africa, the Canary Islands, Los Angeles/Long Beach and Turkey. Data is sourced from a combination of market participants and official records.

The full breakdown of the survey results including sales volumes in each bunkering region for Q2 2022 and 2021 is available for subscribers by clicking here.

Further disruption can be expected in the fourth quarter as the market experiences the downturn more fully, BLUE Insight's Tolson said.

"By now we all know about unwinding of congestion and vessels slowing down or dropping out of rotation – expect Q4 to be far less rosy," he said.

"Otherwise more general cargo-oriented ports are faring a little better in recent months, which might reflect greater fuel consumption and hence higher demand from a good tanker market and even some parts of the dry-bulk market."

The firm is looking for candidates with knowledge of marine fuel specifications and quantity measurement.

The vessel had travelled to Singapore from Shanghai.