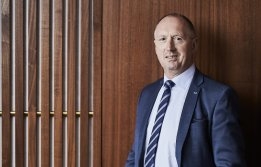 Bunker Holding, the world's largest marine fuels firm, has set out a new corporate strategy seeking to prepare it for the changing environment of the coming years as it prepares to announce the second-largest profits in its history.

The new five-year strategy is a response to the changing needs of its customers, in terms of alternative fuels, technology and how the company is run, CEO Keld Demant said in an interview with Ship & Bunker on Tuesday.

The company will announce its results for the 2021/22 financial year next month. These will reveal profits second only to the record 2019/20 year -- which was boosted by the extraordinary trading margins achieved during the uncertainty of the IMO 2020 transition -- in the company's history, Demant said. 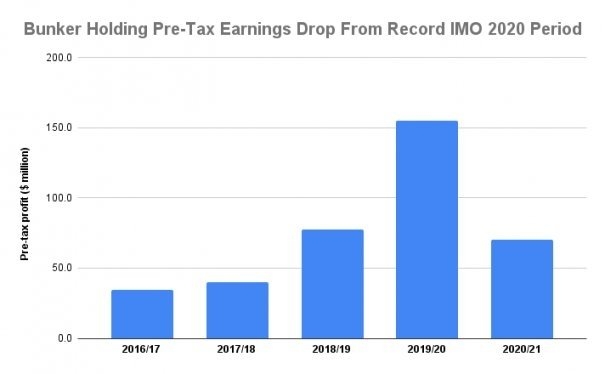 The firm's new strategy has been under development for some time while it consulted the market, Demant said.

"A bit more than a year ago we started a process together with the Boston Consulting Group looking into market trends," he said.

It's the leadership's responsibility to look ahead and say what's coming in the future.

"We spent quite some time on it and had more than 100 interviews to make sure we understood not only the current but also the future needs of our clients.

"This has formed into creating five mega-trends, and then we started planning how to change our company so we are ready to meet them.

"Even if you are as an organisation doing ok, it's the leadership's responsibility to look ahead and say what's coming in the future and prepare for that part."

The five trends the company has identified are digitalisation, the three individual elements of the ESG agenda and the optimisation of internal processes, Demant explained.

"It's quite interesting that often when you talk about the digital agenda people thing it's a certain platform -- it's not, actually; it's the processes that you are going through to actually source the product," he said.

"The ESG agenda takes up a lot of space with all our stakeholders.

"On the E it's of course the green fuels coming, it is whatever alternatives might come up.

"On the social part it's to make sure that we as a company are still attractive to work in; here it is crucial for us that the people we have -- and I think they're the best in the industry -- that we can actually retain them.

"For the corporate governance, it's a lot about compliance, it's taking up a lot of space and after the Ukraine-Russia war, there's no doubt that this is becoming even more complex and you really need to look into this.

"When you're about to invest in the new technology and still want to retain good people, it is also about how you will optimise, stay lean and optimise your internal processes.

"We do not believe that anyone out there is willing to pay the extra cost that the new alternatives are having right now, so we have identified that we as a company need to find smarter and better ways to work to make sure that we can still stay competitive and ahead of the markets."

Bunker Holding now has a taskforce of 10 employees looking into the new fuels.

"This task force is working with the new fuel agenda, making sure that all the tests out there, the trials, that we know about what's going on and that we decide which of these pilots we should take part in, and which we should leave out," Demant said.

Key to Bunker Holding's role will be finding ways of delivering the energy transition while keeping cost increases to its customers at a minimum.

"What we have identified is that the cost of the future product is by far higher than the cost we see today, and we should, by the way we are working today and the way we're working in the future, be part of ensuring that we can actually get better product at a lower cost ready to market," he said.

While the firm will initially be taking an advisory role in preparing clients for the shift to cleaner fuels, Demant said it still aims ultimately to be the physical supplier of the new fuels as well.

"it will be a combination [of roles]," he said.

Before you can actually come to the point where you can decide ... you need a lot of information.

"We have gained a lot of experience from the IMO 2020 transition that before you can actually come to the point where you can decide, this is the way I want to make this transition, then you need a lot of information.

"We want to make sure that we have all of this knowledge in-house, so that when people start planning to look into future fuels, they will know that they can always approach Bunker Holding, and we will have both the willingness and the capability to help them make sure that they will join the right train.

"We will take on a more of an advisory role, but we won't stop being the one actually providing them with the products they need. It's not either/or."

While alternative fuels like methanol and ammonia are something of a theoretical market for now, in the more immediate term LNG and biofuels are not; Rotterdam is already reporting significant sales volumes for both, and Singapore's market for them looks likely to expand sharply this year.

But Bunker Holding is wary of jumping into these markets in a big way while their future outlook is uncertain, Demand said.

We are not willing to put everything on black and say that LNG will be the right product for the next 25 years.

"When it comes to the two intermediate products, the biofuel and the LNG, there is still a lot of uncertainty out there," he said.

"Will there come new rules in terms of LNG because you will lower the CO2 emission but raise the methane emissions, and that might be a problem?

"And in the last couple of days there have been articles in Danish newspapers about if it's ethical to use agricultural land to produce biofuels, or should it be producing food for those who are starving.

"It is really, really important for us to stay light and agile.

"And we want to make sure that even though we have employed LNG experts, that we take on their advice and we do supply and we do do some marketing agreements with certain people -- we are not willing to put everything on black and say that LNG will be the right product for the next 25 years, and as such invest and be asset-heavy."

Bunker Holding had trouble with the Russian oil market before the widespread challenges caused by the war in Ukraine this year; last year the company was in the headlines for a sanctions case caused by jet fuel trades with Russian counterparties in the Eastern Mediterranean.

The firm was fined DKK 4 million, subsidiary Dan-Bunkering was fined DKK 30 million and Demant was sentenced to a four-month suspended prison sentence after the trades were found to be in breach of EU sanctions on Syria.

The company describes the case as 'a strenuous trial', and has expressed pride in achieving solid results last year despite the negative headlines.

"It was very easy in practice, because we have a very sophisticated compliance system, and we simply, as the information came out, shut down all kinds of connection to Russia," Demant said in this week's interview.

"We were very aware of the challenges this decision to stop trade with Russian counterparties created both internally and for our clients, but with the terrible situation in Ukraine we as a group stood very firm on acting on this."

MOL has already set itself a 2050 net-zero goal, and believes it could be applied to the industry more widely as well.

No End In Sight For Oil Price Gains, Analysts Fear

Libya shortages and high inflation are contributing to the tightness.