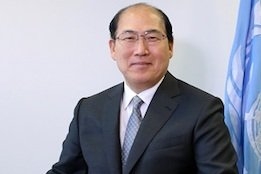 Secretary-General of the International Maritime Organization (IMO) Kitack Lim Wednesday, speaking at an industry conference in London, called progress in talks on how to reduce shipping's carbon footprint over the past few years "a miracle," Climate Home reports.

Lim said IMO member states are "getting closer" to an agreement on how to move forward to reduce such emissions from shipping.

"Next year really will be a time when the world will expect the IMO member states to deliver a vision, as a first stage in the IMO roadmap," said Lim.

As Ship & Bunker reported in October, the 70th session of IMO's Marine Environment Protection Committee (MEPC 70) agreed to develop a Road Map for addressing CO2 emissions from international shipping, with initial CO2 reduction commitments to be agreed to by 2018.

"We absolutely do need targets," said Magda Kopczynska, Director of Maritime Transport at the European Commission's transport department, at the conference.

The organisation has commissioned research from Germany's Öko-Institut that confirms ammonia has 'high potential'.

Trefoil's bunkering customers will be able to buy carbon offsets to cover the well-to-wake emissions from their fuel choice.

"I think we have finally reached a stage where Owners have realized they are not competing on bunker purchasing as such," Hafnia's Head of Bunkers, Peter Grunwaldt, tells Ship & Bunker