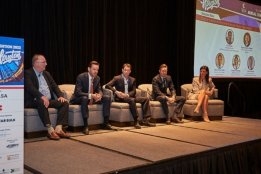 The discussion of the prospects for 2023 came up in a panel session at the IBIA Annual Convention 2022 in Houston last week. Image Credit: Monjasa

2022's geopolitical upheaval drove a record surge in bunker prices this year on uncertainty over the future supply of oil from Russia, delivering rapid growth in margins for the bunker industry.

But the inflation that came alongside this advance in energy markets is now bringing concerns over the central-bank response bringing a global recession.

Smaller players that are regional, and don't have global reach for access to the capital, have struggled.

"I think it's going to look a lot different in 2023; I think we're going into a very challenging period, and I think it's interesting to see how the various players react to that," Marc Holm, senior fuel oil trader at Hartree Partners, said in a panel session at the conference.

Georgia Kounalakis, managing director of Bunker One USA, argued trouble was coming for smaller companies in the bunker industry.

"Smaller players that are regional, and don't have global reach for access to the capital, have struggled in being able to support demand in those locations," Kounalakis said.

"We've had some decent margins, but this business is cyclical, and those margins will start to feel the pressures of this current market environment."

Roger Dekkers, group trade finance director at Monjasa, said rising interest rates were bringing a more short-term focus to the markets, but that the rising costs were manageable when everyone faces the same problem.

"But ultimately the higher-interest environment, for the bunker companies that are able to turn their books relatively quickly, doesn't impact that much because while it's hard for you, everyone is going to be paying that.

"Ultimately it's a game of keeping the book short and trying to stay as agile as possible."

Ultimately it's a game of keeping the book short and trying to stay as agile as possible.

Beyond the cost of credit, the panel also pointed to weakening demand as a concern in 2023. Marc Holm suggested demand from container lines was already down by as much as 20% on the year.

"I think we're going to see a recalibration of the market.

"Does that mean, like Black Hawk Down? I don't think so.

"But I do believe there's going to be a recalibration."

Roger Dekkers highlighted that while markets are on a downturn, this decline is coming from a position of abnormal strength this year.

"It's fair to say that I think pretty much every bunker company has had probably a record year," Dekkers said.

"We are heading, obviously, to much tighter margins, it seems that markets are normalising, but I think it's also good to realise that margins have been extremely strong."

Researchers at the University of Manchester's Tyndall Centre have published a new report titled Shipping's Role in the Global Energy Transition.