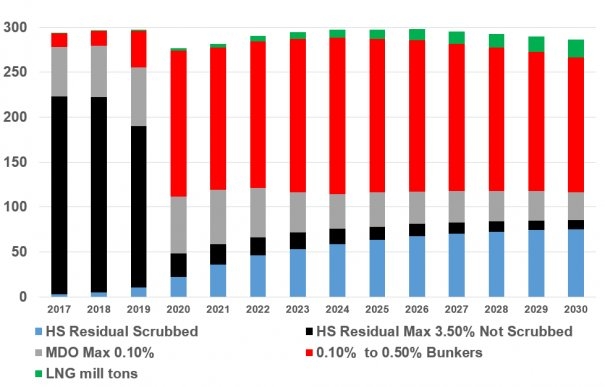 Global bunker demand could be 7% lower overall this year as a result of the COVID-19 pandemic, according to marine fuels consultant and former IBIA chairman Robin Meech.

No economy can rebound rapidly from this

"Can the virus pass over an economy and leave it relatively unharmed? Everything in Europe and the US suggests a contrary outcome," he said.

OECD Secretary General Angel Gurria told the BBC on Monday that it was "wishful thinking" to believe that countries would bounce back quickly.

"No economy can rebound rapidly from this," Meech added.

The estimate in the chart accompanying this story is one of a series Meech's company generates to provide a first tool to stress-test companies and their projects.

There is already clear evidence of bunker demand evaporating, with much of the cruise industry shutting down and reports of around 10% of container shipping capacity being offline.

"We started IP week four weeks ago thinking the economic outlook would be V-shaped; by the end of that week the consensus was U-shaped, and now many are predicting L-shaped -- that economic activity will never regain the level experienced in 2019," Meech said.

Credit will be cheaper, but less available, as banks and fintech lose their capacity and appetite for the high-risk bunker trading market

"If history is anything to go by, it will take about two years to recover, but fundamental changes in the way business is conducted, particularly in the finance sector, will see economic activity diminished for much longer."

Overall he sees bunker demand gaining about 0.36% per year on average between 2020 and 2030, with a rally in the first few years of the decade followed by a decline towards the end of the 2020s as a result of increased efficiency and the start of reducing carbon emissions for the marine sector.

"Economic activity -- GDP as a measure -- is the starting point; at the end of last week the New York banks were saying that the US economy would contract by as much as 24% in the next quarter," he said.

"With these three in steep decline, the way up is going to be slow."

Meech also predicted the economic crisis may make it difficult for the bunker industry to access the credit it runs on.

"Credit will be cheaper, but less available, as banks and fintech lose their capacity and appetite for the high-risk bunker trading market," he said.

"We are into a significant credit crunch at a time when falling prices are hitting suppliers hard."

Finally, Meech pointed out this year's crash may put some shipowners' plans to investigate low-carbon fuels on hold.

"Longer-term, where the key issue has been decarbonisation, it may now be survival," he said.

"The expectation of much lower fossil fuel prices makes the switch to high-cost, low-carbon fuels an even higher barrier, almost certainly cleaning up the planet."

The company expects to post a second-quarter loss of HK$1.35 billion ($174 million), down from a profit of HK$301 million in the same period a year earlier.

The dredging vessel Waymon L Boyd struck a pipeline near the US Gulf port on Friday afternoon.