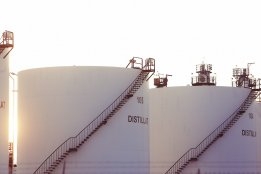 As the deadline for 0.5% sulfur as the global standard for bunkers looms ever nearer, tank operators are recalibrating their capacity.

The terminal will comprise 11 storage tanks and, with a total storage capacity of 74,400 cubic metres for maritime products and waste water.

Rotterdam-based Vopak began maintenance at its storage facility at the start of the year in preparation for IMO2020, according to the report.

Players are faced with problem of retaining sufficient storage for 3.5% sulfur fuel -- still the main product in use -- and meeting the expected demand for 0.5% sulfur product.

In Singapore and citing market sources, Platts reports that stocks of 0.5% sulfur fuel oil have increased to 3 million mt as traders prepare for the rule change.

"Tankage is now tight in Singapore. There was a lot of open capacity in the region only a few months ago, and almost all of it is now taken on a spot basis," a the tank operator was quoted as saying.

International Coalition of Companies Formed to Decarbonise Transport and Logistics

Some of the group's first projects will include developing the use of hydrogen, biofuels and biogas and synthetic gas in transport.