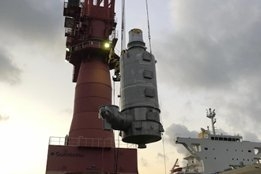 Recent debate over the use of marine scrubbers is healthy, but some of the persistent criticisms of the technology are “just pain wrong”, according to Pacific Green.

The comments came as the scrubber manufacturer sought to debunk what it sees at three core arguments against the use of the technology, saying they are not grounded in science.

The first is that IMO delegates never intended for scrubbers to be adopted in the way that they have been, and critics point to the omission of scrubbers from the original Annex VI as support for this.

However, Pacific Green argues that since scrubbers were included in 2005 IMO’s Marine Environment Protection Committee (MEPC) has convened more than 20 times and there have been no signs of a change of stance on the tech, or talk of any time limits for its use.

it may be easier – and politically fashionable – to suggest that society wants to see lower carbon fuels. But what society really needs is air it can breathe and air that is not toxic

IMO has, however, said it is looking to harmonize scrubber rules as part of the MEPC process and, in the face of some localized actions against the technology, indicated that fragmented rules are a concern.

The second criticism addressed is that the use of scrubbers is at odds with the spirit of MARPOL Annex VI, as well as current environmentally focused socio-political trends.

Pacific Green actually agrees with this - to a point - but says the use of LSFO is not the ultimate goal either, it is the use of low carbon fuels.

“Yes, it may be easier – and politically fashionable – to suggest that society wants to see lower carbon fuels. But what society really needs is air it can breathe and air that is not toxic,” it says.

“Scrubbers are critical to that outcome.”

Finally, Pacific Green addresses what for many are the crux of the scrubber debate - its economics.

Some of the industry’s more outspoken voices on the matter have said they do not believe the spread between high and low sulfur fuels will be wide enough and for long enough to make commercial sense.

Pacific Green points to recent analysis by Stillwater Associates published on Ship & Bunker to suggest otherwise, and says that for larger vessels the payback period is measured in months not years.

Moreover, while LSFO and HSFO prices may get closer in the coming years, no one currently expects they are going to meet.

“The fact that the marginal benefit may become smaller does not take away from the important fact that the benefit itself will endure.”

Marfin Management aims to use the service to manage its compliance with IMO 2020.