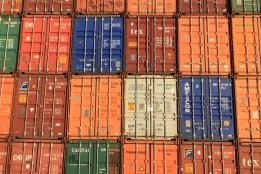 Bunker fuel consumption by AP Moller-Maersk, the owners of the largest shipping company in the world, dropped by 7.5% in the first quarter, the company said Wednesday.

The data from Maersk helps to give a better picture of how global bunker demand has been reacting to the COVID-19 pandemic. Demand at the major hubs mostly held steady or rose in the first quarter, but it is expected that demand elsewhere fell at the same time.

Maersk's fall in bunker consumption was "as a result of blanked sailings from capacity adjustments and efficiency initiatives with more efficient vessels delivered in recent years," the company said Wednesday.

Fuel efficiency measured in grams per TEU per nautical mile improved by 1.9%, dropping to 42 g/TEU*NM from 42.8 g/TEU*NM a year earlier.

The company paid an average of $551/mt for its bunkers in the first quarter, up from $417/mt a year earlier.

Running lower-viscosity fuels constantly may be causing engine problems for some older ships.