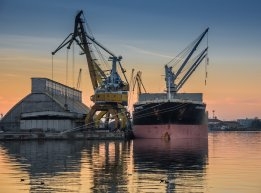 Commodity trader and ship charterer Cargill is looking at emissions abatement technology for ships on longhaul routes as the best way of meeting the new sulfur targets on bunker fuel.

Cargill expects that the technology, more commonly known as scrubbers, will have to be installed on a portion of the world's fleet, the trader's shipping head told maritime news provider Lloyd's List.

"Scrubbers are going to be part of the portfolio" going forward, Jan Dieleman was quoted as saying.

Dieleman's comments come at a time when shipowners and operators are maintaining a wait-and-see approach to 2020 0.5% sulfur cap on bunker fuel.

That approach is perhaps unsurprising given that the price of high sulfur fuel oil is expected to enter a period of volatility once the new cap kicks in. However, a body of opinion in the industry says that ship owners may well turn to scrubbers in the years following the introduction of the new sulfur cap.

To date, the take up of scrubbers has been relatively low. By the end of last year, 240 units had been installed on vessels. The technology works by "cleaning" a ship's exhaust by "washing" it in water.

The resulting water can then be discharged into the sea in an open-loop system or disposed of onland in a closed-loop system.