IMO2020: The Beginning of the End Comes Early for Fuel Oil 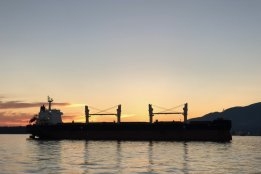 With the IMO2020 rule looming, the beginning of the end for fuel oil looks to have come early with HSFO cracks widening, and fuel oil stocks falling alongside bunker prices.

"HSFO is cracking and we are starting to see the end now," says Adrian Tolson, senior partner at 20|20 Marine Energy.

"It was always going to happen. We all thought it would be October, but here it is in August."

Earlier this week, Ship & Bunker reported that IMO2020 had already sent average IFO380 prices this month tumbling to two-year lows, but there are perhaps more important signs that the upcoming 0.50% sulfur cap on marine fuel has now taken a grip on the market.

At the end of last month the 3.5% FOB Rotterdam barge crack was trading at negative $6.455/bbl, according to Platts data.

By the end of last week that had widened to negative $16.05/bbl.

Overall, analysts report in recent weeks there has been a global slowdown of fuel oil trading activity.

"With HSFO cracks falling off a cliff, we have now started to see considerable pressure on simple refining margins," Reuters quoted consultancy JBC Energy as saying.

A separate source declared that "we're starting to see de-stocking of HSFO" ahead of IMO2020, while data from consultancy FGE last week showed fuel oil stocks in the key bunker supply hubs of ARA, Singapore, and Fujairah fell by 3.9 million barrels week-on-week.

From January 1, 2020, only the small minority of vessels equipped with scrubbers and are able to achieve an equivalent method of compliance will be able to continue burning HSFO, dramatically cutting demand for what has long been Shipping's favourite fuel.

Exactly how wide next year's HSFO / 0.50%S VLSFO spread will get remains unclear, but based on the current outlook even long-time scrubber sceptic Søren Skou, CEO of Maersk, last week said it was looking like "great business" to have a scrubber installed.

Tolson will be discussing the impact of IMO2020 on suppliers, traders, and the overall bunker supply chain next month at the IBIA Caribbean Bunker Conference (ICBC) – The Caribbean Journey to 2020 Compliance, which takes place September 10-12, 2019 at the Iberostar Grande / Suites Hotel, Montego Bay, Jamaica.

For more information, including details on the full agenda and to register, please visit: https://shipandbunker.com/events/icbc