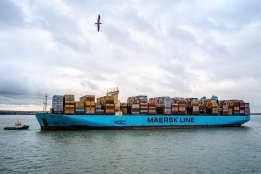 Maersk is one of the world's largest consumers of bunker fuel. File Image / Pixabay

Container shipping firm AP Moller-Maersk saw its bunker consumption slip by 2.7% in the second quarter as its fuel costs surged by 69%.

The firm consumed 2.65 million mt of bunker fuel in the second quarter, up from 2.73 million mt a year earlier, it said in an earnings release on Wednesday. At the same time, bunker costs jumped to $2.19 billion, up from $1.3 billion a year earlier.

Maersk paid an average of $827/mt for its fuel in the second quarter, an increase of 74% on the year. Ship & Bunker's G20 index of average VLSFO prices at 20 leading bunkering ports jumped by 87.6% in the same period.

The firm's bunker consumption per transport work advanced by 2.2% on the year to 41.9 g/TEU*NM.

The two companies have announced a partnership in which StormGeo's s-Insight fleet performance management software will be rolled out across the Hansa Tankers fleet.