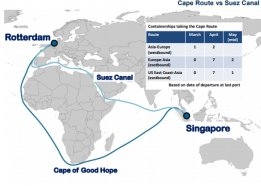 A record number of container ships are taking advantage of lower bunker prices to take a longer route around Africa to avoid paying Suez Canal fees, according to shipping intelligence service Alphaliner.

At least 20 sailings have taken the Cape route to the south of Africa on their way between Europe and Asia since the end of March, Alphaliner said in its weekly report Tuesday.

"The current low bunker price and lack of demand in European markets, hit by the COVID-19 lockdowns, have suddenly made such moves viable," the company said.

The ships taking the longer route will bring a slight boost to bunker demand, paring some of the declines seen in recent months.

The Suez Canal Authority announced an increase in rebates for its fees last week in an attempt to bring more business back.

Panos Tsikleas has joined SEKAVIN as senior bunker trader as of last month.

Gas Carriers Could use Ammonia as Bunker Fuel: Report