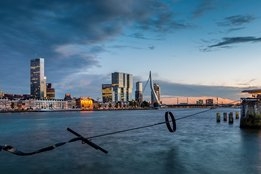 Most of the main bunkering centres are geared up for the switch to low sulfur fuel oil, a new survey has found.

The survey, conducted by maritime publication Tradewinds, looked at the situation across key bunkering ports.

"[It] found that 18 of the world's largest bunkering ports will generally be able to supply the main types of marine fuels in January 2020," according to Tradewinds.

One of the major fears associated with the switch away from high sulfur fuel oil is its implied scarcity. But this appears to be unfounded.

"Concerns over HSFO availability as many refiners move to limit its production appear unfounded. The dominant bunker fuel pre-2020 is still expected to be available at all those ports come January," the survey found.

With alternatives to the predominant oil-derived bunker fuel, the most common form of alternative marine fuel, liquified natural gas, will be commercially available in at least six of the 18 ports, including Singapore and Rotterdam, it said.

Following the recent increase in both supply and demand for VLSFO, Ship & Bunker is now providing indications for VLSFO bunkers in over 60 ports.

Greece's government has recently called for the establishment of an EU Research Centre for Alternative Marine Fuels and Technologies.