ANALYSIS: How Much More Expensive Are IMO2020 Bunkers Really? 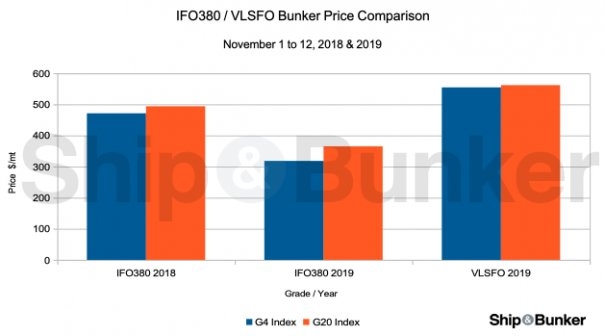 The many months of speculating what the cost of IMO2020 grade bunkers will be are over. November has seen a surge in availability of 0.50% sulfur product and with 48 days to go before the new fuel rules come into force Ship & Bunker already offers indications for VLSFO at over 100 ports - a marked increase from just a few weeks ago.

With vessels now lifting and burning IMO2020 grade bunkers, how much more expensive are they than IFO380, which until now has been by far the industry's most popular grade of fuel?

Looking at current price levels, buying VLSFO today means you'll be paying 14-18% more for bunkers than you were at this point last year.

What we are seeing is very much in line with expectation

Analysts have been predicting IMO2020 will lift bunker prices by 20-40% while scrubber advocates have been working on HSFO priced at a discount to VLSFO of $200-$250/mt. What we are seeing is very much in line with that, and even better for VLSFO buyers & suppliers is that the reality is prices are lower than expectation.

There are two ways to look at the cost increase of IMO2020 fuel:

While VLSFO has been available in some ports since the summer, supply in most ports has been far more recent. For this analysis, then, we will look at the average bunker prices in the period November 1 through 12 in both 2018 and 2019 as tracked by Ship & Bunker's two main price indices:

As expected IMO2020 grade bunkers are more expensive than IFO380; the brutal facts of blending the new 0.5%S bunker fuels have already been discussed on Ship & Bunker, while for HSFO, there are only 48 days left for anyone but the relatively few owners of scrubber equipped tonnage to burn them. Demand and pricing reflect this.

For those switching to complaint fuel, the positive is that VLSFO prices are "only" 14-18% higher than the IFO380 they were buying last year. This is lower than the 20-40% premium many in the industry have been predicating. This can only be good news for all stakeholders - buyers and suppliers alike.

For those who have chosen the HSFO + scrubber route to compliance, there is also good news. They will be paying less for bunkers than they were last year, and the discount for HSFO to VLSFO in dollar terms is (just about) in the $200-$250/mt band many owners have based their scrubber retrofit ROI calculations on.

Of course, this is only a snapshot of current price levels and the picture may well change as we move even closer to the January 1, 2020 start date of IMO2020.