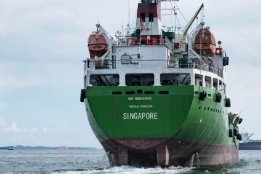 Five years after acquiring Monaco-based Chemoil Monde Export SAM, Fratelli Cosulich announced Friday it has rebranded the unit to bring it under the Fratelli name.

CEO Timothy Cosulich said the move was "in response to the growth of our activities in the bunker trading sector."

"For over 50 years, we have been active as bunker trader. Fratelli Cosulich, a well-known name in the sector is widely recognized by its stakeholders that appreciate our values and ethics in doing business in the crucial area of the maritime industry," Cosulich added

"To support and expand the activities in Monaco, we decided to move Chemoil Mondex under the name of Fratelli Cosulich Monaco SAM. A new name, new logo, but still the same expertise and competence of our Group and the Monaco Team."

Fratelli Cosulich was recently named as one of the Top 10 Bunker Companies for 2021.

Israel's government is now looking into a selection of ships that it thinks could have caused the spill.