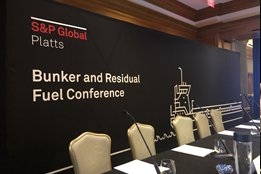 The move to lower the global sulfur cap for marine fuel to 0.50% in 2020 could not have happened without scrubbers, says Carnival Corporation's Tom Strang, Senior Vice President Maritime Affairs,

"If the industry hadn't stood behind the regulators at the IMO we wouldn't be here today, we'd had been looking at 2025," he told delegates last week at the Platts 16th Annual Bunker and Residual Fuel Conference in Houston.

"And to be clear, if scrubbers had not been an option, you wouldn't have been 2020."

IMO made its decision to lower the sulfur cap in 2020, rather than the alternative of 2025, in October 2016 after a study by CE Delft found there would be no major barriers to providing sufficient compliant bunkers.

The study's model included a prediction that in 2020 some 3,800 vessels would be operating with scrubbers.

Today, that expectation looks a little high with the industry currently on track for around 2,600 scrubber-equipped vessels to be in operation when the new rules begin on January 1 next year.

Still, as using a scrubber for compliance allows vessels to continue burning the same otherwise noncompliant high sulfur fuel they do today, some critics continue to maintain that the technology is somehow a way to "cheat" the new regulation.

Or as Hudson Shipping Lines President Avi Eilon put it in a statement Friday, "the use of these scrubbers to allow vessels to continue to burn the dirtiest forms of fuel, high-sulphur fuel oils, violates the spirit and intention of the IMO's new fuel regulations."

IMO currently has no plans to change the rules on allowing equivalent methods of compliance to meet sulfur regs, but says it is taking a closer look at the science behind the use is scrubbers.

But South Sudan is suffering under OPEC's cutback agreement.

The JV listed Fujairah among the ports it planned to serve upon its launch in 2015, but has focused on Asian locations so far.