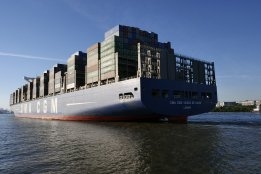 French container line CMA CGM has set its low sulfur surcharge for the bunkers consumed by its ships at $275/mt from February 1, the company said late last week.

The box ship operator initially set the premium at $200/mt from December 1, based on the average price difference between high sulfur fuel oil and 0.50% sulfur fuels in October.

The surcharge is used to calculate extra fuel costs on top of the company's freight rates to compensate CMA CGM for the higher bills incurred complying with the International Maritime Organization's new global 0.50% sulfur limit for bunkers.

The surcharge applies to contracts of three months or less; longer-term deals are covered by the company's bunker adjustment factor, which is now based on 0.50% sulfur fuel prices rather than HSFO.

The surcharge is multiplied by a trade coefficient representing fuel consumption per box carried to come up with the total extra cost to shippers.

The UAE oil company is reportedly looking at alternative forms of bunker fuel to fuel its fleet.