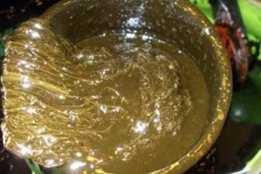 The introduction of Very Low Sulphur Fuel Oils (VLSFOs) for compliance with IMO2020 has increased at a growing rate since October 2019. The chemistry and nature of these new fuels indicates likely problems with cold‐flow properties, stability, contamination, cat‐fines and sulphur content. In order to address cold‐flow problems, VPS introduced a new Wax Appearance Temperature (WAT) in October 2019. This paper illustrates how WAT measurements can be used to avoid cold‐flow and stability problems with VLSFOs. 3 recent case studies are used to exemplify the catastrophic problems that can arise when using VLSFOs if precautionary measurements are not taken.

WAT or cloud point is the temperature at which wax crystals appear when fuel is cooled. This ultimately results in wax precipitation causing the fuel to stop flowing, which has a detrimental impact on operability as it may block filters and pipes, causing fuel starvation and engine problems. Providing that the fuel temperature does not fall below the WAT it will not produce wax, so measuring this temperature is critical in managing and mitigating risk.

At the time of writing, VPS has tested the WAT on more than 230 different VLSFOs taken during bunkering from ports around the world. A summary of the results is shown in the graph below. 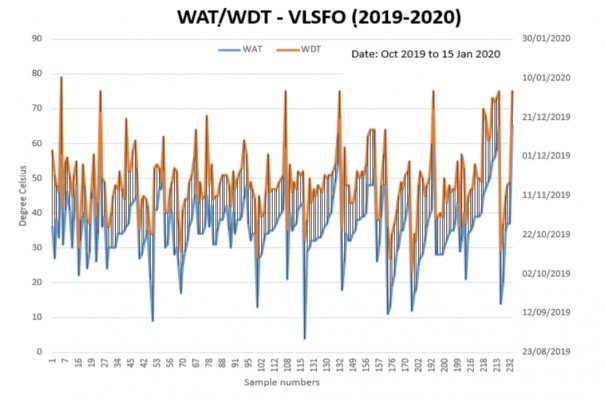 Elevated WAT and WDT could result in wax formation unless the purifiers separation temperatures are maintained above the WAT. If the fuel at any time during storage and transfer has fallen below the WAT, then the fuel may have to be heated above the WDT to melt away the wax formed when the temperature fell below the WAT.

Low viscosity and high WAT are the known recipe for difficulties in separation at the purifiers. The most affected WAT related issues, as reported by the vessels, are with fuels with a lower viscosity at a temperature mainly below 30o C, although the issues were not isolated to low viscosity fuel oils.

Generally, purifier manufacturers, for the new type of VLSFO fuels recommend the following separation temperatures for effective separation of water, catfines and other solid contaminants.

Considering the above separation temperatures in line with the tested WAT and viscosity, we have seen few instances when the recommended separation temperature, based on viscosity (and 15oC + PP) is below the WAT, consequently resulting in purifier issues such as excessive sludge formation or complete blockage in the worst case.

The maximum temperature for effective separation is typically 98°C. From experience it is known that separation is effective at this temperature. We have noted that problems are aggravated when we have a low viscosity fuel (for example, <30 cSt) with high catfines (for example >40 ppm) and high WAT. It almost becomes impossible to treat such fuel on board the vessel.

On the other hand, some of the VLSFO that are blended, are either already unstable or on the verge of being unstable. Such fuels (which are on the verge of becoming unstable) when heated, have a tendency to fall out, so the temperature has to be reduced and maintained as per the above table. The Total Sediment Potential (TSP) of the fuel when bunkered although within limits may show significantly higher TSP when tested on a later date during consumption. The results are the consequence of unstable blends.

Fuels received on board are not supplied for direct consumption without onboard treatment. A great deal of associated risk of using the VLSFO on‐board vessels can be managed contractually, by ordering the fuel that can be handled by the vessels onboard treatment system. For this reason, it is essential for a supplier and the recipient to know the properties of the fuel before supplying (Suppliers) and/or consumption (End users). Testing the fuel before consumption has always been the norm, however, this is now more critical than ever.

On 27 October 2019, a Vessel loaded 100 MT of VLSFO at Antwerp. A continuous drip sample was taken during bunkering and tested to ISO8217 and found to meet the specification. However, when the vessel started consuming this fuel, the vessel reported abnormal operation of the purifiers and blockage of filters. The fuel throughput to the purifier had to be reduced due to sludging issues being experienced at the purifiers. Consequently, the engine had to be operated at reduced load. During this time, the vessel also experienced rough weather.

Had the bunkered fuel been tested for WAT/WDT, VPS could have provided the above advise to the vessel prior to commencing usage of this fuel and help minimise operational difficulties

VPS advised the Chief Engineer to maintain purifier temperature at 98oC, further reduce purifier throughput and reduce the discharge interval of the purifier, which enabled the vessel to continue at low speed. Furthermore, the settling and service tanks temperature were advised to be maintained above 69oC (WAT), this helped to clear the filter blockage.

Had the bunkered fuel been tested for WAT/WDT, VPS could have provided the above advise to the vessel prior to commencing usage of this fuel and help minimise operational difficulties, potential damage to equipment's and loss of hire. The high WAT in combination with high Catfines makes the onboard fuel oil treatment difficult, if not impossible. Settling tanks are designed to perform a key role in removing Catfines (and other solid contaminants) as the heavier particles settle over time, provided the fuel is freely flowing. For effective settling, the Settling tank temperature should always be maintained at or above the WAT. Similarly maintaining the correct purifier temperature plays a major part in effective separation of the fuel.

Typical properties of the fuel:

On consumption, the vessel faced the following problems: 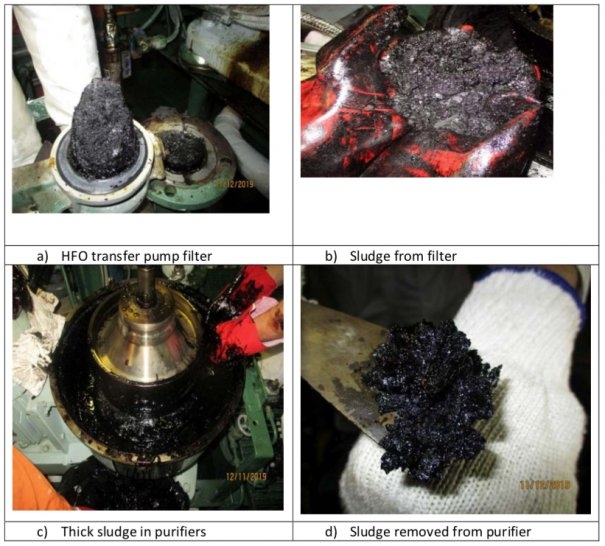 On 20 October 2019, a Vessel loaded >180 MT of VLSFO at Rotterdam. Immediately on consumption of the fuel, the vessel experienced abnormal operation of the purifiers and damage to its fuel pumps. It was also brought to VPS' attention that another vessel which had bunkered the same fuel faced similar issues. A representative bunker sample was analysed in one of the VPS laboratories and based on the test results of the analysed sample, the fuel was certified to be within the ISO 8217 specification.

To identify the root cause, VPS carried out a detailed investigation and not only found that the concerned fuel had a WAT of 57oC and a WDT of >75oC, but also the GCMS test revealed presence of styrenic chemical contaminants. The TSP result of the bunkered fuel was well within limits (<0.01%) and as such, no stability issues were expected.

Low viscosity (32.6 cSt at 50oC) caused restrictions in heating the fuel to elevated temperatures, whereas high WAT/WDT required the fuel to be heated to at least above 58oC, or above 75oC if the temperature at any time during the storage had fallen below 57oC, which was the case on this vessel. Furthermore, due to the type of cargo the vessel was carrying there were restrictions in heating the bunker tanks to above 50oC.

VPS advised that the fuel cannot be handled on board the vessel and cannot be used. The fuel was debunkered.

Typical properties of the fuel:

On consumption the vessel faced the following problems: 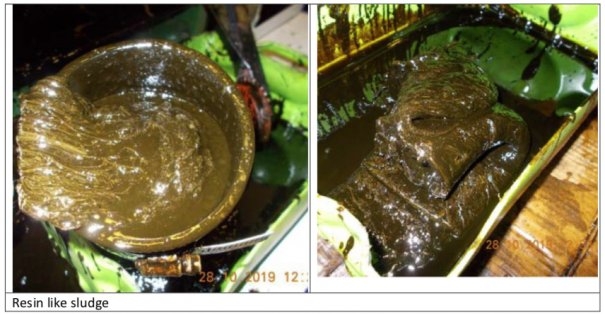 On 14 December 2019, a vessel loaded >300 MT of VLSFO at Houston. This was the second ever batch of VLSFO for the vessel. No issues were reported during the consumption of the first batch which was bunkered at Las Palmas. Immediately on consumption of the Houston fuel, the vessel reported clogging of both its purifiers. In the first 24 hours the vessel cleaned both purifiers twice, being able to run one purifier for only 6 hours. The bunker storage, settling and service tanks were emptied completely and manual cleaning was carried out before taking the first stem of the VLSFO at Las Palmas. It was reported that there could have been some amount of comingling (about 1 m3) of the earlier VLSFO fuel with the new batch of Houston VLSFO.

Although additional tests where being carried out, the vessel required urgent advice to keep the engines in operation

After 24 hours of consumption of the fuel, the operation could not be stabilised, the vessel was unable to handle the situation and contacted VPS for expert advice.

VPS immediately carried out a systematic investigation of the events. VPS had tested a representative bunker sample of the concerned fuel that was drawn by drip sampler during the bunkering operation. The test results showed the fuel to be within the ISO 8217 specification.

The vessel reported improvement in the purifier operation for the first 4 days, but later faced the same sludging issue. This time the sludge was harder than earlier.

The fuel sludge had started to fall out over the course of time and the vessel was advised to keep the purifier throughput to minimum and reduce the discharge intervals such that the fuel can be consumed slowly. A stabiliser (fuel additive) option was considered as a standby but was not required.

Typical properties of the fuel (As per BDN):

On consumption the vessel faced the following problems:

The Bunker Storage, Settling and Service tanks were emptied completely, and manual cleaning was carried out before initially taking the first stem of VLSFO. All sludge was removed, without any traces of old fuel in the tank. There was no possibility of mixing of HSFO with VLSFO.

The current fuel in use is the second batch of VLSFO that we loaded in Houston. First Batch of VLSFO was loaded from Las Palmas and the vessel did not face any issues with that batch of fuel.

The first stem that was loaded from Las Palmas (previous port) may have mixed with VLSFO loaded in Houston; but it was less than 1.0 m3 of VLSFO which remains as unpumpable. However, as per the compatibility report, both fuels were compatible when tested.

Reportedly, no additives or stabilisers were used in any of the tanks.

Brief summary of actions taken on board the vessel:

Based on the tested viscosity (13.14 cSt) the temperature of 40oC was maintained at the purifier inlet and inlet to engine at 60oC to achieve 11cSt for injection.

When purifier sludging and clogging of the filter was noted and reported, VPS requested the vessel to increase the fuel oil temperature at the purifier inlet from 40oC to 72oC, Settling tank to 60oC and storage tanks at 40oC. The vessel reported that a temperature of 75oC was consistently maintained. The filter clogging and purifier sludging issue appeared to stabilise.

Please find the below photos of accumulated sludge in the Purifier frame. The first two photo was taken when the purifier was clogging every 6 hours during the first 24 hours of consumption.

After 4 days of operation the sludging problem resurfaced, but this time the sludge was much harder than the first time. The purifier was getting clogged in the sludge frame, outside the
bowl. Minimum flow over the purifiers and discharge interval to 15 minutes is all that could be done to consume this fuel.

The symptoms are a typical incompatibility case, probably mixing of the VLSFOs in the settling tanks. 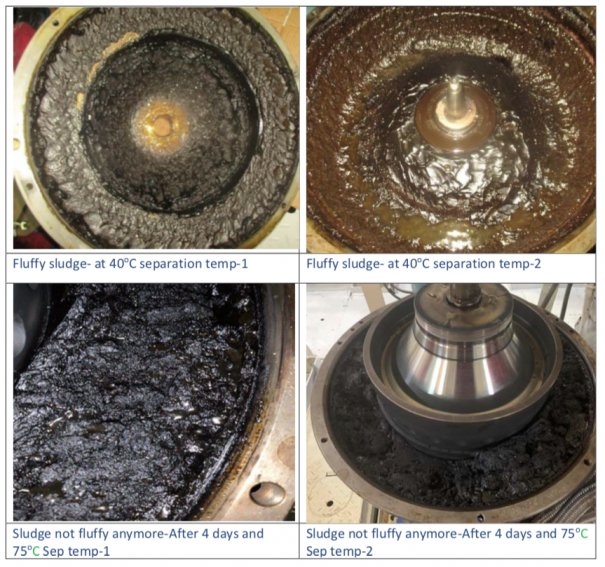 The new "freshwater charge" may add up to 15% to the cost of traversing the Panama Canal.