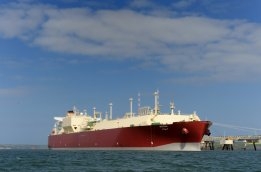 LNG from Qatar may be in use as a bunker fuel for longer than some expect. Image Credit: Qatar Petroleum

Qatar Petroleum's huge new plan to spend more than 70 billion Qatari riyals ($19.2 billion) on building LNG carriers over the next seven years includes some bullish assumptions about the role of natural gas in the marine fuel mix beyond IMO 2050.

The company has secured about 60% of the world's LNG carrier building capacity up to 2027, it said in a statement on its website Monday, which could see it building more than 100 new LNG carriers.

The deal is the largest LNG shipbuilding agreement in history, with Qatar Petroleum securing capacity at three of the most sought-after yards in South Korea.

We will continue working on reducing emissions from our fleet to protect the regional and global environment.

"The new LNG vessels will be equipped with the latest generation slow speed dual fuel engines, utilizing LNG as a fuel," Qatari Energy Minister Saad Al-Kaabi said in the statement.

"This will ensure the most efficient performance and compliance with the latest global emission and environmental regulations.

"We will continue working on reducing emissions from our fleet to protect the regional and global environment in line with the environmental objectives of the Qatar National Vision 2030."

The plan hinges on LNG remaining in use as a bunker fuel long after 2050 -- an idea that some in the bunker industry keen to push a shift to hydrogen-based fuels may take issue with.

New LNG carriers built today would typically be planned with a commercial lifespan in mind of 30-35 years. For the ships that Qatar Petroleum plans to build in 2027, that could leave them potentially still on the water burning boil-off LNG in 2062.

At present just 3.43% of LNG carriers excluding bunker barges are older than 30 years, according to data from shipping intelligence service VesselsValue; this mostly reflects that much of the modern LNG export industry is a much newer phenomenon than that.

Peter Livanos, chairman of Gaslog, pointed out this problem in a call with investors earlier this year, saying any LNG carriers ordered today "gets to 2050 and probably is technologically challenged in terms of residual value."

That would mean LNG carriers ordered in the current years would have to be financed based on a shorter 25-year lifespan, he said.