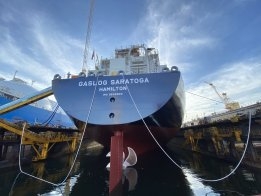 The International Maritime Organization's (IMO) initial strategy on the reduction of greenhouse gas (GHG) emissions is cutting the commercial life of LNG carriers, which typically burn part of their cargo as fuel, by as much as ten years, according to LNG shipping company Gaslog.

The IMO's initial strategy envisages a cut in carbon emissions per transport work of at least 40% from 2008's levels by 2030, followed by a tougher target of a drop in the shipping industry's total GHG emissions by at least 50% by 2050.

"We can meet the 2030 IMO targets as a shippping industry along all types -- container, bulker, tanker -- by shifting to LNG fuel and making some modest adjustments to the way we run these ships in terms of speed," Peter Livanos, chairman of Gaslog, said in a call with investors Thursday.

"There is no way we will achieve the 2050 target without a major change in propulsion systems."

For most commercial ships with a lifespan of less than 20 years you would be able to order one fuelled on LNG today, meet the 2030 target and then subsequently order the next one once you have a better view of the zero-carbon technologies available by that point, Livanos said.

But the typical 30-35 year lifespan of an LNG carrier makes investment decisions around them more complicated, he added.

"That means that every LNG ship today gets to 2050 and probably is technologically challenged in terms of residual value."

LNG carriers ordered for delivery in 2024-25 for planned projects in countries like Mozambique and Qatar will have to be financed with an expected commercial life of 25 years rather than 35, he said.

The company expects to see 90 million mt of LNG demand growth between 2019 and 2025, it said in a presentation, of which 10% will be from LNG bunkering.

Rising crude export volumes from US paves way for enhanced role for WTI benchmark, according to price reporting agency Argus

The company warns of a worst-case scenario in which boxship freight rates decline as much as they did in the aftermath of the financial crisis in 2009.