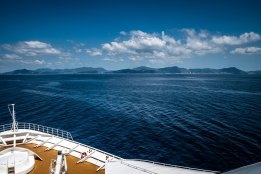 The unfolding Covid-19 pandemic has caught the cruise sector between a rock and a hard place.

There are currently between 20 to 30 cruise ships at sea and completing their journeys while, ultimately, looking for a secure anchorage.

But in the febrile atmosphere surrounding the coronavirus outbreak, finding a port is easier said than done.

The Costa Victoria docked at the Italian port of Civitavecchia yesterday.

Bunker sources say that the ship is one of four from the company looking for a safe berth.

Many ports are either refusing to let cruise ships dock or are imposing quarantine rules, a case in point being the Artania, which is currently anchored off Perth and has been told to leave Australian waters, Deutsche Well reports.

However,  US ports are open to returning cruise ships, according to cruise industry assocation CLIA whose members suspended US cruise operations from mid-March for a month.

But cruise ships, with or without passengers, still need fuel thereby providing some cheer for bunker traders.

"The end of this week has definitely been busier [on the back of cruise ship demand]," one Mediterranean-based bunker trader said.

But further down the line, grounds for optimism are thin.

A northwest Europe-based trader noted the absence of cruise tenders for fuel which would normally be taken about now.

"They will do spot this time, I think.  Or simply not come," the trader said.

Non-essential events at the port cancelled but port keeps working.

Oil Rises On U.S./Russia Agreement As Virus Infection Rates Slow In Some Countries