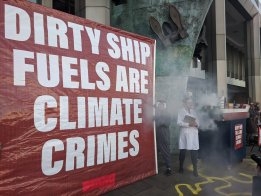 Protesters in a variety of costumes were outside the IMO building to greet arriving delegates on Monday morning. Image Credit: Jack Jordan

A group of environmental protesters campaigning on the aromatic content of very low sulfur fuel oil (VLSFO) greeted delegates arriving at the International Maritime Organization (IMO) headquarters in London on Monday morning as a subcommittee of the UN body prepares to discuss the issue.

Protesters outside the building noted the alleged environmental impact of some VLSFO blends, with signs reading "Dirty ship fuels destroy the Arctic."

In recent months environmental groups have been highlighting a German and Finnish study pointing out the potential for some VLSFO blends with higher aromatic content to have higher black carbon emissions than high sulfur fuel oil (HSFO), with a particularly detrimental potential impact in the Arctic.

Shipping and bunker industry groups have countered that charge with the claim that most VLSFO blends currently in operation are more paraffinic in nature than aromatic, and are thus likely to have lower black carbon emissions.

The issue is up for discussion at the IMO this week in a weeklong meeting of the Subcommittee on Pollution Prevention and Response (PPR).

Environmental groups are hoping to see progress towards a ban on the use of anything other than distillate-based fuels in the Arctic, as well as towards a global ban on fuels with high black carbon emissions.

Vessel forced to burn HSFO with its scrubber shut off to comply with local regulations.

Ship & Bunker estimates demand could currently be down by as much as 8% worldwide.