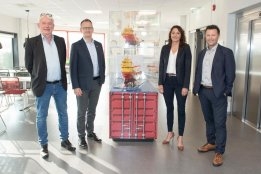 Wärtsilä will work on the project with Eidesvik Offshore. Image Credit: Wärtsilä

Engineering company Wärtsilä is set to convert an offshore supply vessel to run on ammonia.

The company has signed a deal with Norway's Eidesvik Offshore to retrofit one of its offshore supply vessels, currently equipped with a dual-fuelled engine primarily running on LNG, to ammonia combustion, it said in an emailed statement on Friday. The project has a provisional deadline of the end of 2023.

The conversion will allow the ship to run on a 70% ammonia blend -- a ratio which Wärtsilä has already successfully tested in an engine. The companies will seek ultimately to use a 100% blend.

"Using ammonia as a fuel is seen as a key future contributor to shipping's energy transition, and we're excited to be the first offshore ship owner taking this step," Jan Fredrik Meling, CEO of Eidesvik, said in the statement.

"This project is yet another confirmation of our strong reputation as a pioneer in implementing new environmental technologies in both newbuilds and the existing fleet."