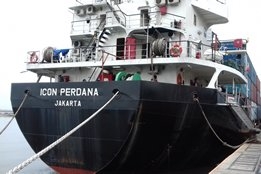 With the industry focused on the challenge of fuel switching to meet next year’s new global 0.50% sulfur cap, Shell has reminded shipowners to not forget to factor in new lubricant requirements as part of their plans.

“Lubes are often overlooked, but optimizing this process can lead to significant savings,” he told Ship & Bunker.

Chen highlighted a recent case where a customer in Indonesia switched to using the firm’s Shell Gadinia medium-speed engine oil, resulting in a reduction in costs of 58%, equivalent to saving $16,900 per vessel annually.

“We are delighted that following the change in oil, ICON Line vessels are operating more efficiently and more cost effectively,” said Chen.

“After running engines using Shell Gadinia S3 40 for a period of time, independent laboratory tests confirmed that oil-drain intervals can be extended from 1,500 hours beforehand to 3,500 hours.”

Shell Gadinia S3 40 is a multi-functional diesel engine lubricant suited for medium-speed main or auxiliary engines burning fuels with sulfur contents up to 1%.

Rising Inventories, Not Iran, Cause First Weekly Crude Loss of 2020

But some analysts still worry that Iraq's oil production could be harmed.