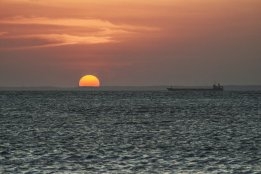 The Middle Eastern bunkering port of Fujairah is feeling the impact of a spate of unexplained attacks on tanker traffic in the region.

Tanker operators are avoiding the area which has led to weaker demand for bunker fuel, according to business news provider Bloomberg citing market sources.

One bunker source gave an anecdotal estimate of more than a 30% decline to 500,000 metric tonnes (mt) of bunker fuel sold a month. Fujairah, a top three bunkering destination, had annual sales of around 9 million mt in 2018.

Higher premiums charged by insurers for shipping transitting the region's seaways are keeping traffic away, according to the report.

While it cites local officials as saying that there's been no slump in refueling from facilities at the port, brokers and traders are seeing the drop-off in bunker business to ships at anchorage areas.

The attacks on shipping, the most recent took place in June, form part of a pattern of rising regional tension on deteriorating relations between between Iran and United States.

Oil Up On Optimism Over Second Trade Deal, But Commodity Has An "Ultimate Cap", Says Citi