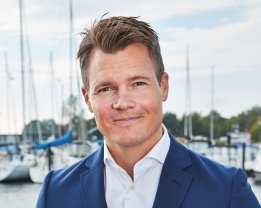 Global bunker supplier Monjasa has started to offer its customers detailed information on the carbon footprint of their fuels throughout their production, transportation and use.

This year the firm has started to offer some of its larger customers CO2 reports setting out full scope 1, 2 and 3 emissions data for their bunker purchases, Jesper Nielsen, group responsibility director at Monjasa, said in an interview with Ship & Bunker.

"Many of our customers were just getting their arms around this, and then learning that we hold these instrumental pieces of the puzzle," Nielsen said.

Our role for now could be educating and increasing the data quality up and down the supply chain.

"I think they were positively surprised.

"When we were just developing our own carbon accounts earlier this year, we quickly realised that the upstream transportation data was not just readily available; I think that we sort of assumed that it would be there from our large suppliers, but when we asked for it, it was not.

"We quickly realised that from our unique position in the middle of the chain, this was something that we could assist with.

"Our role for now could be educating and increasing the data quality up and down the supply chain."

In May the firm announced its new responsibility framework in collaboration with Deloitte, saying it would produce an annual responsibility report tracking its own progress on environmental and other goals.

We're seeing overwhelming interest from many different types and sizes of companies.

Monjasa has automated the process of creating the reports, meaning it can roll them out to more customers and produce them on a more regular basis than annually if needed. The company believes it is the first supplier to offer this level of data, and plans to roll out the offer to all of its customers eventually.

"For starters we were focused on properly delivering this to our key clients, because we worked on the assumption that the larger the company, the more interest they will have in this field," Nielsen said.

"But we're seeing overwhelming interest from many different types and sizes of companies."

Getting the reports may be the first stage in bunker buyers being able to put pressure on suppliers to deliver a product with lower associated emissions.

"They could strategize on that and see if they could in practical terms reduce emissions," Nielsen said.

We firmly believe that you cannot really improve what you don't measure.

"But what we want to do is just increase the data quality, because if you don't hold these exact numbers then you will naturally be working with assumptions.

"We firmly believe that you cannot really improve what you don't measure."

The reports also raise the potential scenario of bunker suppliers starting to compete on the carbon emissions of their fuels at some point in the future. Bunker suppliers that can offer fuels with a demonstrably lower carbon footprint from their full supply chains may be able to command a premium for their products.

"I would definitely not rule that out in the medium to long term," Nielsen said.

"Right now it should be about obtaining control of emissions and understanding each stakeholder's individual impact."

The bunker delivery vessel Asahi, the world's first running on batter power only, carried out its first delivery on Tuesday.

To help owners of net-zero ships recoup cost of investment.