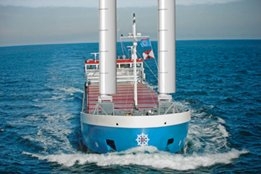 Netherlands-based eConowind, who specialize in wind-assisted ship propulsion tech, has bagged the first customer for its Ventifoils system.

Jan van Dam Shipping has signed a contract for the installation of the system on their 3,600 DWT general cargo vessel MV Ankie.

Delivery of the Ventifoils will take place in Q4 2019.

The system comprises of tall slender towers that at first glance resemble rotor sails, but are actually non-rotating wings with vents and an internal fan that translate boundary layer suction into propulsion.

"The Ventifoil is a wing shaped element using modern innovations in aerodynamics creating high propelling force relative to its size. Smart suction is integrated in the wing, resulting in double the force of the Ventifoil while reefing when needed," the company explains.

The MV Ankie installation will feature two, 10-meter wings along with two extensions of six meters.

While exact performance figures were not discussed, Jan van Dam, owner of van Dam Shipping, said the bunker savings it is expected to produce will pay for the system in about three years.

The Ventifoil system has been developed over the past three years with support by an EU backed grant.