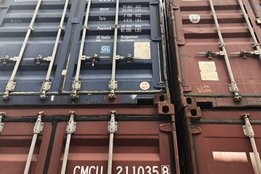 While the Pacific carrier likes the look of scrubbers + HSFO for its compliance strategy and this week said it was fitting units to a further three of its vessels, many of the world's biggest box carriers including CMA CGM Group and Hapag-Lloyd have been vocal about taking a predominantly fuel-based approach to IMO 2020 compliance.

The world's biggest carrier, Maersk, has gone a step further in being notably outspoken against scrubbers.

Those carriers are predicting compliant fuel in 2020 will add billions to their bunker bills and have already laid out plans to recover this cost through IMO 2020 bunker adjustment factor (BAF) charges.

what the true cost of compliant fuel will be in the run up to 2020 and beyond is one of the biggest unknowns of the new global 0.50% sulfur cap

With the likes of Global Shippers Forum (GSF) and the British International Freight Association (BIFA) having already voiced their displeasure at the new surcharge, Cox believes the carriers could struggle to recover the premium for IMO2020 compliant fuel.

"While it is clear that the ocean carriers are going to be incurring additional expense associated with this compliant fuel, what is less clear is the industry on the international side's track record of being able to pass through costs," he said.

"It's primarily a function of whether or not the international ocean carriers can manage the supply and demand adequately to allow for those factors to be in balance and create a somewhat more orderly market that would allow for those incremental fuel surcharges to be implemented.

"To the extent that they can't do that, then I think they're in for a world of hurt in managing that additional cost burden."

With ships already steaming slower to reduce bunker consumption, Cox sees some services slowing down even further as part of efforts to manage the increase in fuel costs.

With significant uncertainty not only over the price of oil but to what extent bunker and crude prices will become disconnected, what the true cost of compliant fuel will be in the run up to 2020 and beyond is one of the biggest unknowns of the new global 0.50% sulfur cap.

Some see that premium for IMO 2020 fuel over HSFO as high as $400/mt; Euronav CEO, Paddy Rodgers, last week said refiners have indicated to his firm that the premium could be half the current HSFO/MGO spread, which Ship & Bunker data indicates is currently around $260/mt in the world's key bunkering ports.

MOL subsidiary Phoneix Tankers has signed a deal with Namura Shipbuilding to build the ships.