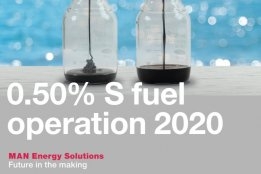 New advice from shipping's biggest main engine designer has highlighted some of the engine issues that could await unwary ship operators as they begin operating on low-sulfur fuels.

MAN Energy Solutions has released a 56-page guide to operation on IMO2020-compliant fuel regarding two-strokes engines. As reported previously, the engine designer has stated that its engines will burn very low sulfur fuel oil (VLSFO) regardless of the anticipated variation in fuel qualities across blends.

But the new guidance alerts ship operators to other potential issues related to 2020 compliance options.

Operators of older, mechanically controlled (MC) main engines will need to check that their fuel pumps can handle fuels with a lower viscosity than conventional, high-sulfur residual fuels. MAN reported that users of all engines burning VLSFO should make sure that fuel pumps are not worn in order to handle the anticipated lower viscosity. But MAN B&W MC engine operators will need to pay particular care.

Unlike the more modern, electronically controlled engines, the plunger speed of fuel pumps on MC engines is determined by engine speed rather than fuel supply pressure. The pumps are also calibrated for a much lower fuel supply pressure at engine start-up, corresponding to 15% of engine load as opposed to 75-78%. The pumps on mechanically controlled engines also feature a shorter leakage path, increasing the risk of blockages if they malfunction.

MAN cited tests and calculations showing that a worn-out fuel pump for an MC-engine cannot start on a fuel with a viscosity of 2cSt or lower. The guidance notes: "[Worn] fuel pumps should be replaced for better engine performance. We advise that sufficient spares are kept on board for replacement at sea, if needed."

The advice is not confined to VLSFO. MAN also reminded operators of dual-fuel engines that they will need to use low-sulfur pilot fuel under IMO's global sulfur cap unless they also use exhaust gas scrubbers.

According to IMO's Marpol Annex VI, operators cannot mix fuels onboard to meet sulfur content requirements. For dual-fuel engines burning a combination of LNG (with only traces of sulfur) and liquid fuel, this means that the liquid fuel must also have a sulfur content of 0.50% or lower.

The prohibition applies to dual-fuel engines even though liquid fuel will account for only around 5% of fuel burned in gas mode, as pilot fuel to ensure stable combustion. Using 3.5%S heavy fuel oil as pilot fuel would give a total fuel sulfur content (for pilot fuel and gas fuel combined) of 0.002%.

Without the restriction, authorities would struggle to enforce sulfur limits on dual-fuel engines, as they can also be operated in full diesel mode. In this mode, engines must burn either 0.50% sulfur fuel or have their exhaust cleaned by a scrubber.

The guide also looks at how operators can handle fuels that are not fit for purpose. Among the recommendations, MAN suggests that such fuel, if bunkered, should be kept in a separate tank. If use is unavoidable the fuel should diluted as much as possible with on-spec fuel. Operators should only start using it in a safe, deep-sea area and should stop immediately if problems occur.

MAN suggested that crew monitor fuel pump, separator and filter performance during use. Ideally a back-up fuel should be carried in order to switch fuels if needed.

The guide also includes checklists for making ship implementation plans (both before and after 2020) and managing fuel stability and incompatibility.

MAN's guide can be downloaded by clicking here.

As of March 11 the company has 30 vessels operating with scrubbers.

The company is due to publish first-quarter results on May 13.