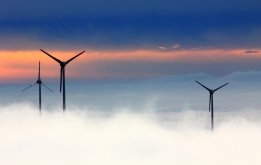 Shipping company MOL has signed a deal with Tohoku Electric Power to transport coal in a ship partly powered by wind energy, the companies said Thursday.

The ship will be equipped with a hard sail wind power propulsion system that can reduce its emissions by about 5% on the Japan-Australia route or by about 8% on the Japan-US West Coast route, the companies said in an emailed statement.

The ship will be built by Oshima Shipbuilding, and is due to start operations in 2022. The companies plan to conduct more verification tests on the potential of the wind system to reduce emissions over the next two years.

"It is clear if you cannot sell as bunkers at a significant premium over cargo then one of three things has to happen: the actual quantity delivered has to drop, short-cuts are taken with blending or companies go bust."