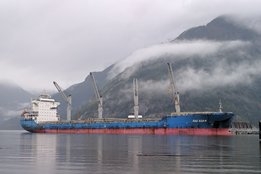 In case there was any doubt that reducing ship speed saves money, a study has been presented at IMO headquarters this week to support the economic case for slow steaming.

The study by Öko-Institut e.v. in Germany focused on the economic benefits of slow steaming for bulk carriers and references work undertaken in 2009 by Martin Stopford.

Stopford's calculations show that if a Panamax travelling at 16 kn reduced its speed by just 1kn to 15 kn its fuel consumption would fall 17%. Dropping form 16 mn to 11 kn would result in savings of 67%.

While slowing down vessels would result in a rise in their non-fuel related costs, including those for crew, insurance, and maintenance, costs overall would still be reduced up until a certain threshold.

"The adoption of progressively higher speed reductions extends the number of days at sea and this results in additional bulk freight costs," the study says.

"However, based upon our analysis these additional bulk freight costs are offset by the lower fuel costs in the majority of the scenarios, unless the fuel price is very low or a 'break-even point' speed reduction is exceeded where the marginal fuel cost reductions no longer offset the marginal operational cost increases under slow steaming."

While the industry has been slowing down of its own accord for around a decade as a natural way to balance global fleet size and demand levels, IMO is currently considering proposals to force vessels to slow down further as part of efforts to reduce industry GHG emissions.

Oil Up on Libyan Force Majeure, Analysts Disagree on Its Potential Market Impact

However, the majority view is prices may be range-bound for 2020.