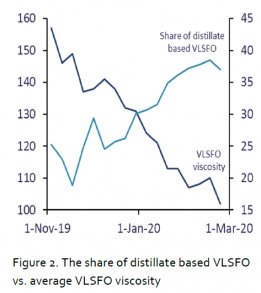 The average viscosity of the very low sulfur fuel oil (VLSFO) blends that have become the dominant bunker fuel this year is dropping rapidly, according to trading company Integr8 Fuels.

Average VLSFO viscosity dropped from about 160 CST in early November to about 100 CST by March 1, the company said in a research note published on its website Wednesday.

The company has seen an even more pronounced drop in Singapore, from 170 CST to 90 CST over the same period, and in Malta, from 150 CST to 50 CST, it said.

The fall in viscosity appears to be correlated with increased total sediment potential, the company said.

"The trend of lowering viscosity in combination with other factors is a cause for concern," the company said.

"The new VLSFOs are more paraffinic (waxy) and with a higher pour point than HSFO.

"Under reduced purifier temperatures such fuels may tend to produce wax sludge, which could cause handling difficulties; it could also potentially affect the efficiency of removing particles such as aluminium and silicon to safe levels."

While lenders are unlikely to be willing to set up subordinate mortgages to finance the installation of this equipment, other financing is likely to be available.

UK transport minister Grant Shapps has called for the move at the start of London International Shipping Week.