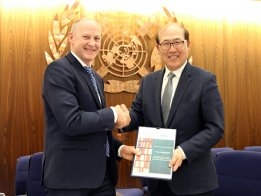 The IMO-Norway GreenVoyage-2050 project will initiate and promote global efforts to demonstrate and test technical solutions for reducing GHG emissions from shipping, enhancing knowledge and information sharing to support the IMO GHG reduction strategy, the United Nations body said in a statement.

The collaboration between IMO and the Norwegian government will run for an initial two-year period.

More than 50 countries in 14 sub-regions across the globe are expected to participate, including developed countries and strategic partners from the private sector.

In addition, the project aims to build capacity in developing countries, including small island developing states and least developed countries, to fulfil their commitments to meet climate-change and energy-efficiency goals for international shipping.

Concerns raised that banks could wind back financing to the marine fuel sector.