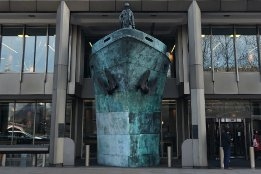 A proposal for the shipping industry to adopt a target of net zero emissions by 2050 looks to have been rejected by member states at this week's 77th meeting of the IMO Marine Environment Protection Committee (MEPC77).

Ambition currently set out by IMO's initial decarbonization strategy is to reduce emissions from marine shipping 50% by 2050 (relative to 2008 levels) and aim to eliminate them completely as soon as possible within this century.

Under debate this week at MEPC77 was an official proposal tabled by by Marshall Islands and Solomon Islands for a net zero 2050 target, a move proceeded in recent weeks by a significant push by over 150 industry heavyweights who say that full decarbonisation of shipping by 2050 is possible.

an outcome of MEPC77 maintaining the status quo was widely expected

Several companies, including the likes of Amazon and Ikea, have also recently pledged to only use zero-carbon shipping solutions by 2040.

While the net zero by 2050 target was supported by a number of nations, including the US, the majority of members sided with Saudi Arabia and China who were opposed to making changes to the current strategy at this stage.

However, MEPC chairman Hideaki Saito said there was consensus among members that work was needed on strengthening the ambition of the initial IMO GHG strategy in line with COP26. Proposals for any changes to current targets will happen during a strategy review that is already tabled for 2023.

As previously reported, an outcome of MEPC77 maintaining the status quo was widely expected, with sources telling Ship & Bunker ahead of the meeting that member states of the IMO would likely be waiting for signs of progress at COP26 first before seeing if it needs to toughen its own decarbonization targets.

IMO members have been invited to submit their proposals for strategy revisions for review at MEPC78 in 2022.

Fire broke out on the 4,253 TEU boxship ZIM Kingston on Saturday.

The event, titled Shipping and Marine Energy -- Evolution or Revolution, will be held online on November 2-4.

The company received a letter from the Danish Business Authority in late December 2016 saying it suspected it was selling jet fuel that was ending up in Syria.