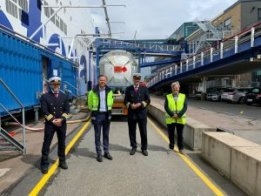 The Stena Germanica, one of the first ships to run on methanol, has taken on a stem of cleaner blue methanol for the first time.

The ro-pax ferry bunkered the methanol on June 22, operator Stena Line said in a statement on its website on Thursday. The methanol was produced using carbon dioxide captured from the steel industry. Conventional methanol is produced using fossil natural gas.

"A great collaboration between the steel industry and maritime, showing there are ways of drastically reducing climate impact by working together," Erik Lewenhaupt, head of sustainability at Stena Line, said in the statement.

"For Stena Line this is another proof of concept for our methanol conversion and a bridge towards fossil free shipping."

Container shipping giant AP Moller-Maersk plans to run its first carbon-neutral ship on green methanol upon its delivery in 2023.