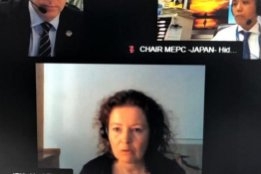 The changes mean there is now consistency over the fact a quantity of bunker fuel can yield a fuel sample that tests at 0.53% sulfur and it can still be considered compliant with the global 0.50% sulfur limit for marine fuel.

The rules are set to enter into force on April 1, 2022, but IBIA's Director and IMO Representative, Unni Einemo, has urged Member Governments to apply the amendments now.

The limitations of test methods mean compliant bunkers that have a sulfur content of 0.50% overall can still yield a sample that indicates a value slightly higher than this. This fact is reflected in the test procedures for in-use and onboard fuel samples, but was not recognised for the MARPOL delivered sample.

Many find it hard to understand that a test result of 0.53% sulphur does not conclusively prove that the fuel fails to meet the 0.50% sulphur limit

"Many find it hard to understand that a test result of 0.53% sulphur does not conclusively prove that the fuel fails to meet the 0.50% sulphur limit," IBIA said in a written statement to MEPC.

"However, all test methods have limitations with regards to their accuracy, with specific reproducibility and Repeatability values calculated in accordance with ISO 4259. For sulphur, the accuracy of the test method, known as 95% confidence, means that fuel oil with a true value of 0.50% sulphur may give a test result of up to 0.53% in a laboratory."

The inconsistency has only become a problem for the industry following the January 1, 2020 introduction of the "IMO 2020" global 0.50% sulfur cap. Prior to this the average sulfur content of marine fuel was around 2.7%, well within the previous 3.5% sulfur limit meaning such marginal differences were a non-issue.

"We have always feared that the complexity in having different approaches to sulphur verification for MARPOL delivered samples versus in-use and on board samples would cause unintended confusion and conflict. Experience so far suggests that this is indeed the case," IBIA noted.

What About the 0.47%S Blending Limit?

The 95% confidence approach means VLSFO bunkers with a nominal sulfur content of 0.50% can be expected to produce samples that test in a range 0.03% above and below their actual sulfur content.

For example, a cargo of fuel with an overall sulfur content at the 0.50% limit can be expected to yield samples that test between 0.47% and 0.53%.

As there is no way to know where in this range a single test falls, the safest way for a suppler to ensure they have produced complaint fuel is to presume all samples are indicating at the lowest end of the range and set their blend target to 0.47% sulfur.

"Let me be very clear about the expectations on suppliers: no fuel should be put on the market if it has tested above the limit even by a fraction prior to delivery, and the blend target to meet the 0.50% sulphur limit during production should be no more than 0.47%, in line with best practice guidance," IBIA said.

The firm is currently constructing the 130 m vessel, and has been asked by the customer to investigate the possibility of changing the plan to a battery-electric design.

The barge -- built at Astilleros de Murueta in Erandio and owned by Mureloil -- is the first of its kind to supply bunkers in Europe.