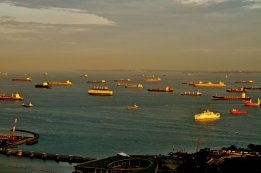 The largest bunker suppliers can be expected to take a growing market share at the biggest marine fuels hubs in the coming years as their economies of scale allow them to outperform smaller players, according to brokerage NSI.

The shift of the largest commodity trading firms into bunkering was initially grudging, but has become much more deliberate and pronounced since the IMO 2020 transition brought increased physical supply profits, Paul Hardy, head of business development at NSI, wrote in a note to clients this week.

Survival of the Biggest

"There are now highly experienced people in charge of their bunkering divisions; they have the advantage of in-house tonnage and a global view on the cargo market that localised suppliers cannot match," Hardy said.

"I see an increasing amount of tonnage being taken by the major commodity trading and logistic powerhouses of this world over the coming years.

"I see the high-volume ports being increasingly dominated by the cargo players, and the smaller ports continuing to be controlled by the companies with local knowledge.

"The ones that will struggle are likely to be those smaller players in the larger markets."

Mercuria grew its presence in the bunker market with the addition of the newly-acquired Aegean Marine Petroleum assets into Minerva Bunkering in 2019, while Trafigura launched new bunker supplier TFG Marine with shipping companies Frontline and Golden Ocean. Vitol bought a presence in the Singapore bunker market in Sinanju Marine Services with its acquisition of Sinanju Tanker Holdings in March 2020.

What Next for Trading Firms?

Bunker trading firms will now face the challenge of keeping up with the commodity giants, according to Hardy.

"The interesting factor will come as the margins and volumes decline in the traditional bunker trading houses -- will they be tempted to snap up some of these smaller suppliers to leverage their position to keep up with the global cargo trading houses?" he said.

"In a normal market I would say this is a very good idea.

"As a former trader, the 'in' was always a specific port with a commercial advantage. You then grew outwards from that with the customer.

"The complicating factor is, with the new fuels coming on stream, will the current niche port with a commercial advantage still have the same economic advantage with a different fuel in 5-10 years time?"

The new hire had previously served in a variety of banking roles in Panama and Venezuela.

The new system will provide members with bunker alerts from VPS for any ports near their ships where fuel-quality problems have been detected.