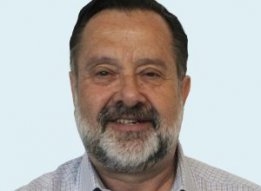 Tolson has been been in the bunker industry since the 1980s. Image Credit: BLUE Insight

Industry veteran Adrian Tolson sees at lack of vigorous guidance from regulators meaning that the only way to genuinely tackle longstanding and widescale fuel delivery shortages is for the bunker industry to change its mindset, and become more accountable and transparent.

Tolson, head of consultancy BLUE Insight, as well as serving on IBIA's board, made these comments after his firm recently released research that revealed that shipowners and charterers that pay for fuel in Fujairah and Rotterdam were losing an estimated $250 million per year in payments for fuel they didn't receive.

BLUE Insight's methodology is based on calculating the difference between the delivered bunker premium to cargoes and the costs suppliers face per tonne of fuel they deliver. Tolson's assumption is that suppliers will not sell at a loss for extended periods of time, so if the latter is higher than the former, the difference can be seen as a measure of the scale of bunker fuel going missing.

His initial report, published earlier this month, suggested that about 3%, or about $150 million/year, of the bunkers recorded as delivered at Rotterdam were never actually pumped on the ship. The calculations for Rotterdam, based on VLSFO prices in 2021, are as follows: 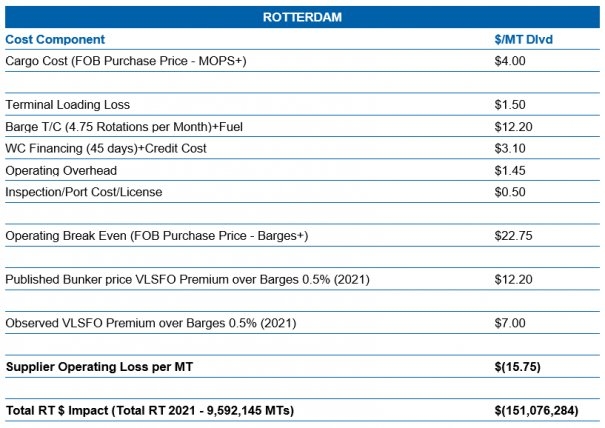 The report can be viewed here. BLUE Insight will publish a full report with a global view on the issue later this year.

Tolson has seen the problem of delivery shortfalls over four decades of work in the industry, and is trying to use the research to encourage a change of attitudes, he said in an interview with Ship & Bunker.

"When I first started work in the industry, I soon became aware that the properties of fuel that were on the bunker receipt, that actually influenced the quantity the customer was getting, were very different from what they were actually getting.

You became naïve to the fact that there was something wrong.

"This was so commonly practiced, certainly amongst independent suppliers, that you became naïve to the fact that there was something wrong with this.

"36 years down the road, this hasn't really changed.

"Different generations enter the industry and don't question the status quo; to a small degree it's changed in certain locations, but the reality is that the same situation exists, and many turn a blind eye to what's going on."

He referred to a particular problem he had seen while working for a supplier with a relatively new Singapore supply start-up in the late 1980s.

"We kept getting these massive quantity claims with a key US-based owner, and so one day I took it upon myself to go through months of inventory data and following all the movements of oil on the barge, and it was pretty obvious what was going on.

"There were small amounts of fuel moving off and on the barge which weren't related to loadings at terminals or deliveries to ships recorded on the books."

I think the industry can do better.

The problem in stopping cases like this will be in shifting away from the idea that this behaviour should be the norm, he explained.

"I think the industry can do better," he said.

"A lot of this is that many people in the industry have been inculcated into a philosophy that accepts this type of practice, when that's not truly who they are or I believe want to be.

"It's become a collective view that because one does it, everybody has to do it and we need to do this to survive in a highly competitive industry."

MFMs a Plus, But Not a Panacea

Tolson's argument is partly for more widespread use of mass flow meters. These systems measure oil deliveries much more accurately than traditional methods, and have been compulsory for bunker deliveries in Singapore for several years.

But MFMs alone will not solve the problem, he said.

"It's a tool that allows you to accurately meter delivery quantities, but unless you have what has been done in Singapore, with a robust and comprehensive form of regulation, you'll find it very difficult.

"And Singapore is unique -- because it's a small country with oversight over all elements of the delivery chain and the hugely important ability and willingness to criminalise wrongdoing."

Some progress is being made towards licensing and regulation of bunkering. A range of Dutch ports including Rotterdam now have a licence scheme in place for bunker barge operators and may consider adding an MFM mandate to that system in a review next year.

And discussion of bunker supplier licensing and MFM mandates is now much more widespread; industry bodies IBIA and BIMCO are currently processing a survey on this issue, with the results expected to be published in the next few weeks.

But where official regulations fail to emerge, bunker suppliers or groups of suppliers may need to engage in self-regulation, Tolson argued.

"What I'm trying to get at is that it ideally requires a supportive port authority, or government but failing this it can be achieved by an individual supplier or a localized association of suppliers.

There is a complete mindset change necessary in our industries -- shipping and bunkering, because shipping gets the bunker industry it deserves.

"Making sure that obviously, the MFMs are properly installed, certified, maintained and regularly inspected and, if not possible within the customs and regulations of an individual country, then through a self-regulatory process with outside monitoring organisations.

"And this needs to continue on an ongoing basis, because otherwise people will find a way around.

"One key element is record-keeping and the transparency of record-keeping, and this links to a digital record of everything and every movement within the supply chain of a supplier or a group of suppliers, and if this is properly metered and properly controlled, then there isn't a lot of opportunity to cheat in that chain.

"There is a complete mindset change necessary in our industries -- shipping and bunkering, because shipping gets the bunker industry it deserves -- and many in bunkering learned their bad habits from, and occasionally had them encouraged by, the shipping industry."

This change in mindset may well get greater support than expected in the bunker supply industry if it can be set up in a way that levels the playing-field for suppliers, Tolson said.

"The irony of all this is that in the high-volume ports, generally speaking most of the suppliers would be very happy if there was a sudden overnight mandatory system," he said.

"The motivation is clearly there; they're not making much money operating in the world they're operating in."

The Case for Optimism

Tolson said he sees attitudes changing already in the past few years.

"If you go back a few years, there was a very limited group of owners and major suppliers complaining about industry practices; that was the initial narrative and now there are many more voices.

If we're not to be viewed as a bunch of cheats, for want of a better term, we need to at least self-regulate.

"What the MPA's efforts in Singapore did was to show everybody that you could sell 50 million tonnes of bunkers and you didn't have to steal anything."

"IMO and the world of alternative fuels are now looking at our industry; if we're not to be viewed as a bunch of cheats, for want of a better term, we need to at least self-regulate.

"There were many operations I was involved in over the years where we tried to operate as legitimately as possible, but it just became obvious that the other side of the equation was just stealing oil and it became very difficult to compete.

"I was part of the problem at one stage; I don't mind admitting that.

"It's past history, all I can do is support the industry as it evolves to create a fairer, more transparent system that will prepare the sector well for its future."

The firm expects to certify its new generation of Series 2000 and 4000 mtu marine engines to run on second-generation biofuels and some synthetic fuels from the beginning of 2023.

The two were part of a group of 12 individuals charged earlier this year for allegedly accepting bribes by former Shell employees between 2014 and 2017.