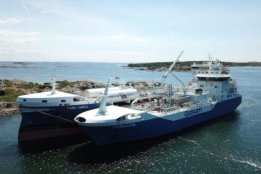 The vessel was delivered in June 2017. Image Credit: Gasum

The operation was the barge's 500th since entering service in 2017, the company said in a LinkedIn post on Monday. The vessel was delivered in June of that year, and carried out its first delivery in September 2017.

"Since it started in 2017, Coralius has supported a high variety of different LNG fueled vessels such as cruise vessels, ferries, crane vessels, product tankers, container ships and others in their quest to reduce pollutant and greenhouse gas emissions," the company said in the post.

"For all these operations, Gasum performed compatibility studies, developed specific safety procedures, and obtained permits for in port and offshore locations from the relevant authorities.

"With this track record the Coralius crew have developed an unmatched efficiency in performing bunker operations."

The LNG bunker industry has grown rapidly in the past five years with natural gas emerging as the dominant alternative fuel, and supply has now been established at most major hubs and is being rolled out steadily to the smaller bunkering ports. But shipowners with gas-powered tonnage are now increasingly asking for bio- and synthetic LNG to be added as supply options as a means of further cutting GHG emissions.