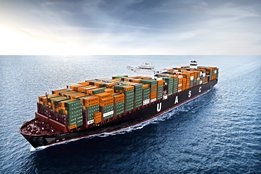 Hapag-Lloyd says it will convert one of its vessels to be capable of burning liquefied natural gas (LNG) bunkers.

Writing in its 1H 2018 report, the world's fifth largest container carrier by capacity said it would modify "a large vessel" in its fleet to use the alternative fuel as part of a pilot project for its IMO 2020 compliance.

Hapag-Lloyd said as recently as March that it considered the use of LNG a viable compliance option.

Back in 2015, Ship Finance International (SFI) CEO Ole Hjertaker tipped dual-fuel engines to increasingly feature in the box markets, but it took until November 2017 before a box carrier committed to using gas as a vessel' its primary fuel source.