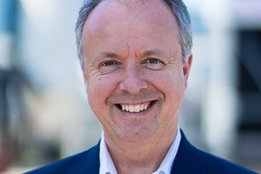 IMO2020 is a big deal, but this will be nothing compared to what some foresee needs to happen if the shipping industry is to meet its IMO2030 and IMO2050 GHG reduction targets.

Radical, expensive, and unproven technologies are required in order to succeed, we are told. But a route to decarbonize the current bunker supply chain is also quietly on target to reach commercial maturity within the next few years.

Is direct air capture of carbon (DAC) radical? Perhaps. But talking to Ship & Bunker recently, Steve Oldham, CEO at Carbon Engineering (CE), is keen to stress that expensive and unproven it is not.

Critical for the Shipping and bunker industries is that the $68 million CE just raised in its latest round of funding means A-list investors such as Bill Gates, Chevron, and mining giant BHP have helped put it on course to have a commercial plant operating by 2022.

This is the point at which a bunker supplier could offer genuinely carbon neutral bunkers with zero changes needed to its products or supply infrastructure. Zero changes would be required by the shipowner too, and the cost to them would be similar to meeting the upcoming switch to IMO2020 compliant low sulfur fuels.

"If a ship or plane is emitting CO2 then traditional thinking is to solve the problem on the plane or the boat. This typically means we must develop ships and planes that are electric or use fuel or energy that is carbon neutral," Oldham told Ship & Bunker.

The problem is that this is a big ask. Especially when we consider a 30-year lifespan for a ship.

The attraction of carbon capture is it offers what is currently one of only a few routes to decarbonize using existing technology and infrastructure while better solutions are developed and realised.

"Even if you use it to partially offset emissions, it makes the task of decarbonizing each ship considerably easier because you don't have to completely decarbonize. Maybe you only have to half decarbonize because you know the other half is being offset by DAC," says Oldham.

"It's a thought process that is only just beginning to get into people's minds because DAC has been perceived as too expensive to achieve. What we want people to know is DAC is a feasible and affordable part of the GHG solution."

As Ship & Bunker previously discussed when we looked at CE's technology in detail last year, the headline cost is $100-$150 per tonne of CO2 captured for a plant operating over a 25-year lifecycle. Given that roughly three tonnes of CO2 is produced per one tonne of bunkers burned, that would mean a premium of $300-$450/mt on the base bunker cost to make them carbon-neutral using CE's DAC technology.

CE's pilot plant is located in Squamish, Canada, just north of the Port of Vancouver.

"Our pilot plant currently runs in a batched approach, so each step is proven but the continuous operation of the whole process autonomously is not. So the money we've raised does that for us," Oldham explained.

"It also allows us to complete the full engineering design of commercial plants, but not build them. That's the next step for the company. Later this year we are also planning to announce our first large scale CO2 capture plant. It will be backed by very credible people and it will clearly demonstrate that this is no longer a theoretical PowerPoint idea, it's ready to go."

From there, Oldham sees commercial operations beginning in 2022 with a maximum of three such plants initially.

CE's business model is to license its technology, rather than offer a CO2 offsetting service via plants under its own ownership.

"That way we can proliferate our plants a lot quicker. We will license to anyone that wants to build them, they finance it, they produce whatever they need," says Oldham.

"For maritime, that could be a shipowner wanting to decarbonize its global fleet, or a supplier offering carbon-neutral fuel to shipowners or other buyers where it is not practical for them to build and operate their own plants."

A bonus for suppliers is that the captured carbon can be used to make zero sulfur, low carbon footprint drop-in synthetic fuels.

With its financial backing in place, the main barriers for CE appear to be more political in nature than technological.

Specifically, critics say carbon capture is just a distraction that could encourage the use of fossil fuels for longer than would otherwise be necessary. It also does nothing to offset environmental damage caused by the extraction of fossil fuels.

"Unfortunately it's going to take us time to move away from fossil fuels and develop the technologies that will allow us to do so. And we have a global economy these days so let's not kid ourselves, the demand isn't going away," says Oldham.

"DAC buys us time because we need to get on with decarbonizing now but we don't have the technology and infrastructure ready to do so. If we can decarbonize and at the same time, buy us time to move off fossil fuels, why wouldn't we do that?"