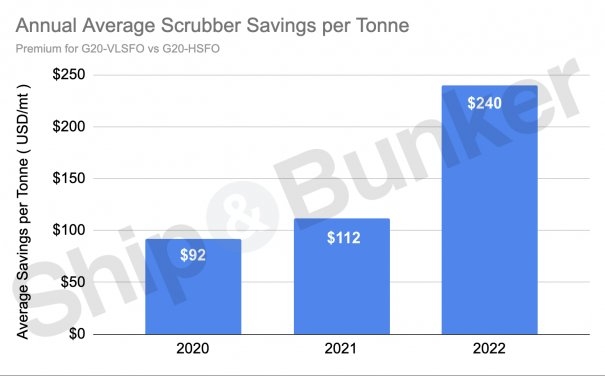 Using data from Ship & Bunker's G20 index, which tracks fuel prices at 20 key bunkering ports that represent a significant proportion of global bunker sales, in 2022 the average daily premium for VLSFO over HSFO was $240/mt.

Also significant is that at its peak last year the high/low sulfur spread hit $421, higher than the widest spread of $315 seen during the IMO 2020 transition period.

2022, then, should be remembered as a good year for those who who invested in scrubbers

While scrubbers have delivered on their promise of allowing ships to burn cheaper fuel in the post-IMO2020 era, the size of the savings witnessed in 2020 and 2021 has fallen below expectation.

While savings of around $100/mt is generally considered the level at which stakeholders begin to consider investment in the technology, during the pre-IMO rush for scrubbers there had been much speculation that savings of $200/mt would be common place.

2022, then, should be remembered as a good year for those who who invested in scrubbers, and indeed a number of vessel owners have said both on and off the record that last year they had witnessed significant savings from their EGCS-equipped ships.

Among those were Eagle Bulk, who during their Q3 earnings call last November said: "Pro forma for the Tokyo Eagle, 48 out of our 53 ships will be scrubber fitted. On an illustrative basis, given Eagle's fleet, we estimate that our scrubbers will generate approximately $58 million in incremental net income on an annualized basis using the 2022 year-to-date fuel spread figures and the forward curve for the balance of the year."

Ship & Bunker understands that scrubber manufacturers are also seeing a resurgence of interest in the technology and it now remains to be seen whether an anticipated 'second scrubber wave', something that was written off in 2021 by BIMCO as 'unlikely', could now come. 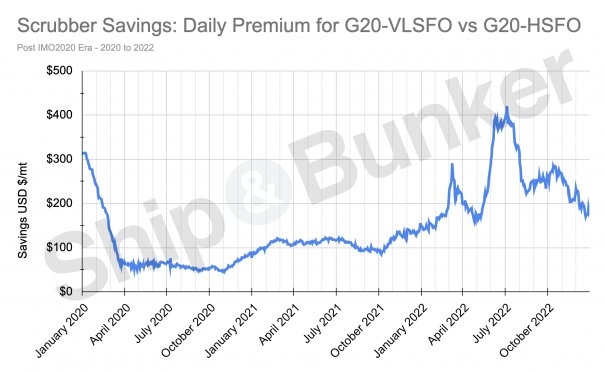 The company has already carried out its first bunker deliveries, with a physical supply operation delivering by truck and ex-pipe from its storage facilities, a representative tells Ship & Bunker.