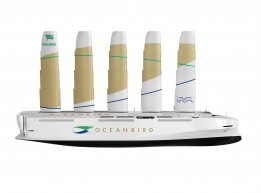 The two companies have formed a new joint venture, AlfaWall Oceanbird, the firms said in an emailed statement on Tuesday.

"Though designed for wind propulsion, the Oceanbird technology has more in common with modern planes than traditional sailing vessels," the companies said in the statement.

"It comprises an array of rigid wing sails, built from steel and composite materials, that generate forward movement instead of vertical lift.

"These wing sails will be able to turn 360° to make optimal use of the wind.

"The technology will be valid for any vessel type, but it will be implemented first on a transatlantic car carrier.

"Able to carry 7,000 cars, the vessel will be 200 metres long and will cross the Atlantic in 12 days when sailing at an average speed of 10 knots."

The Oceanbird concept was first announced in September 2020.

LNG bunkers priced in HSFO terms overtook VLSFO prices at Rotterdam on June 14 and have remained at a premium since then, according to Ship & Bunker pricing.

Some 15 new countries have been added to Hong Kong's high-risk list for COVID-19, meaning vessels having visited them within the previous 21 days would need to quarantine before receiving fuel.