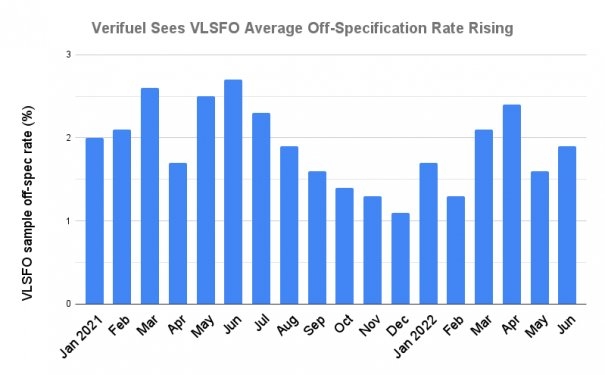 This year's peak so far in the off-spec rate was in April. Image Credit: Ship & Bunker / Data Credit: Verifuel

The share of VLSFO samples found to be off-specification continued to climb on a sequential basis in the second quarter of 2022, but remains below levels seen this time last year, according to Bureau Veritas bunker monitoring unit Verifuel.

The rate may be declining as we head into the third quarter, with 2.4% of samples found to be off-specification in April, 1.6% in May and 1.9% in June.

The global average viscosity of all VLSFO samples the company analysed was 153 cSt in the second quarter.

An increase in quality problems might be expected in the aftermath of the Russian invasion of Ukraine, with middle distillates now much harder to come by and more experimental blending components likely to be used. Singapore saw HSFO contamination problems in February and March, and a similar situation may have emerged at the Amsterdam-Rotterdam-Antwerp hub in recent months.

The global average viscosity of all VLSFO samples the company analysed was 153 cSt in the second quarter, up from 142 cSt the previous quarter and the most since at least 2020. Average density rose marginally to 945.5 kg/m3 from 945.2 kg/m3 the previous quarter.

Charlotte Rojgaard, global head of marine fuel services at Verifuel, is due to speak at the IBIA Annual Convention 2022 in November. The convention will be held at the JW Marriott Houston hotel on November 15-17. The event will consist of a bunker training course on November 15, followed by a series of keynote speeches, presentations and panel sessions over the following two days.

For more information and to register for the event, click here. If you would be interested in participating as a speaker or panellist, contact IBIA's global head of marketing and events, Sofia Konstantopoulou, at sofia.konstantopoulou@ibia.net.

Miriam Dalli, addressed the issue in a keynote speech at the IBIA Mediterranean Shipping and Energy Conference in St Julian's on Wednesday.

The two companies have signed a joint development agreement seeking to use Vertoro's crude sugar oil as a bio-feedstock in bioMSAR.